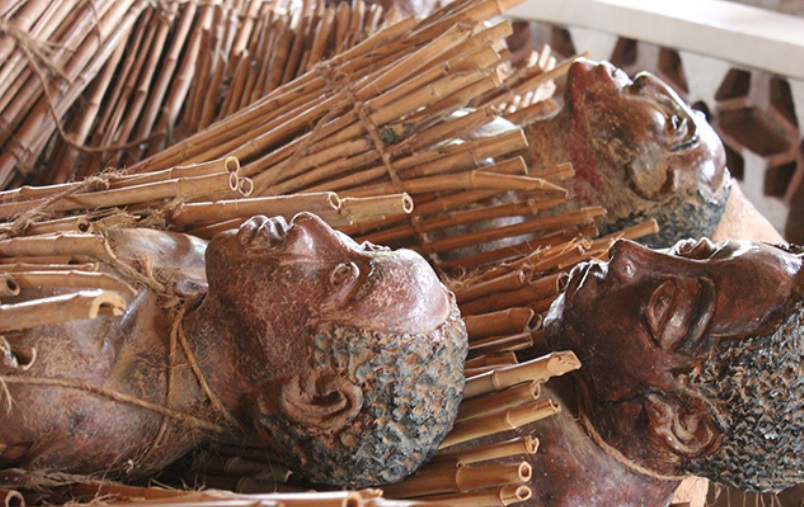 One of the saddest human experiences is death, it is difficult to handle. More awful is the death of a family member who dies believing in nothing. Death without faith leaves one empty and betrayed by existence that was got on credit. The Uganda Martyrs teach us not to leave our life to chance.

The brothers and their mother who are featured in this reading were tested but did not surrender their faith. At a time of great persecution, they believed and even though the awareness of a life after death had only began to make sense among Hebrews, a few clung to it with a tenacity that was contagious. Each brother strengthened the other with his professed belief in eternal life. That belief did not lessen their pain or shorten their suffering, but it enabled each of them to accept that death, however horrible, cruel and unjust, was a passage to everlasting life. In this belief lay their hope and we who hear their story are inspired by it to make hope our sure shelter in every adversity. We need to learn that hope works in these ways. It looks for the good in people; it discovers what can be done; it regards problems, large or small as opportunities; it pushes ahead when it would be easy to quit; it ‘lights the candle’ instead of ‘cursing the darkness.’ If ever anyone had just cause to grumble, it was this family that was unlucky to exist during regime of Antiochus Epiphanes IV. A Greek tyrant ruler during the second-century B.C., who attempted to affirm his authority by forcing Greek culture on all his subjects. This reading illustrates atrocities that he did on those who refused to comply.

In telling the story of the seven brothers and their mother, 2 Maccabees wished to present our audience with heroes whose example should encourage similar faithfulness to God and resistance to any tyranny. This spirit of resistance fostered the formation of a group known as the hasidim/pious ones. These forerunners of the Pharisaic party became fierce defenders of the law and traditions of the Jewish people. While others were coerced to accept it, the hasidim remained strong and fought to keep their heritage intact. This movement eventually erupted in a successful rebellion led by Judas Maccabeus around 167 B.C. But it was not sheer military effort that won the war against the unbelievers, it was their faith. Their unity as a family, their refusal to sin and obedience to the Law of Moses turned the tide of the war into hope in an unending life. Their suffering encouraged them to remain faithful rather than surrendering. Armed with our faith in one God we should never surrender to useless threats. Good life does not comprise only in what is convenient but what is useful.

We proclaim to you, that God is light and in him is no darkness at all. If we say we have communion with him while we walk in darkness, we lie and do not live according to the truth. John is saying that we cannot be in communion with God if we are still sinning. Sin makes us liars. Let us consider the passage as a whole. John speaks of communion here, both with God and with one another. It is communion which makes our lives worthy living. Instead, we deceive ourselves when we try to pretend that all is fine when it is not the case. As baptized we cannot live in any way we want and conclude that this will not affect our life style. Walking in the light is the way to have real friendship with God and with each other. We cannot have God’s truth or his word in us if we are not truthful about ourselves.

The truth is that God is all light without any dark side in him; that is why we can we can trust him utterly. When in darkness miss a relationship with him because darkness impends us. To walk in the light does not only mean to be sinless but to acknowledge what no matter what, God is able to save us. When we walk in darkness, we remain in a place of deceit deceiving ourselves about who we are. Sin is not just what we do wrong; instead the deeper part of sin is the lack of trust in God, presuming we can save ourselves. Sin is this deceit and great desire to cover up this truth. Sin makes be afraid of the light because of what it may reveal. This is why John is assuring us that the character of God is light. God’s truth and his word moves us to see better as we walk with him assisting us to transform every day. When we become aware of our sin, we can hand it over to him to forgive, cleanse and heal us. To be holy like the Uganda Martyrs means to be a totally healed person walking in the light of God expressed in obeying God’s commandments un conditionally.

The whole life of a Christian is to bring the Light of Christ into the world. This was the mission of the Holy Martyrs of Uganda; to bring the light of Jesus and his Gospel into this nation and beyond so that it might be cleansed of all sin, especially corruption, idol worship, power struggle and scandalous division. Ugandans in particular and Africans in general, we still need to imitate these Holy Martyrs.

Whenever people are living together as a community, they need to agree on some common guideline so that their aim, mission and vision is achieved. These guidelines are what we call the ratified fundamental law of governance. For many Nations, the oldest written national document still in operation is the Constitution which defines the principal organs of government, their jurisdictions and the basic rights of all citizens. In a sense, the Community of Matthew found itself in circumstances comparable to any Nation. Certain events had made it necessary for them to define it self as unique.

When Jerusalem and the temple were destroyed by Titus the Roman General in 70 AD, both Jews and Christians run away. In order to survive, a group of Jewish thinkers, under the leadership of Rabbi Johannen ben Zakkai, gathered at Jamnia near the Mediterranean coast and set up the academy that asserted the rabbis’ authority as interpreters of the law and regulators of Jewish life. Part of their efforts at reorganization included the expulsion of pagans and other heretical groups. Precisely around 85 AD also Jewish Christians were officially expelled from the synagogue. Matthew’s gospel, and in particular the Great Sermon that we are reflecting upon today was their response to this Jamnia edict. Because of this breach between Church and synagogue the number of Gentile Christians increased making Matthew identify it as unique thus calling them blessed.

Whereas formerly the Torah had been their guide and inspiration, it became necessary for Christians to adapt a new law which they termed the constitution of the kingdom of God. In this Great Sermon, Matthew was able to find a new identity and provide a new authority which based its source in Jesus. Jesus came not as abolisher but as the fulfiller of the law; as such he is presented in the Great Sermon as teaching, “You have heard it said…but I say to you” Matthew 5:22-48.

In helping them to find their true identity, Matthew invited them to live according to the spirit of the anawim, the humble remnant who declare dependence on God as the only source of their life and joy. Called ‘blessed’ are the poor in spirit who have surrendered self-will, selfishness and every other base of security to welcome the reign of God. Also blessed are the sorrowing, the lowly, and those who hunger and thirst for holiness. These are basic dispositions that are necessary for believers to identify themselves and become open to receiving divine gifts. The final four beatitudes, describe those whose dependence on God has made them sharers in the task of preaching and furthering his reign. The merciful, the single-hearted, the peacemakers and the persecuted are thereby blest because of their identification with Jesus, in his person and in his mission.

Matthew places words in the mouth of Jesus declaring that will be losses in our lives; there will be times of devastating doubt when we wonder: Why? Why do we have to die? Why do we suffer? Why are the innocent persecuted? In those times, the words of Jesus and those who have been his witnesses with practical faith will prove to the world how wrong they were when they thought that life ends on earth. If it were not for hope, the heart would break. Through these holy words, Jesus challenges us to reaffirm our belief and to allow to be feed by fire of hope.

Death is never easy; the untimed and unknown end of life is a fearsome, but it is unavoidable aspect of every human being. What matters is how one dies. If we don’t prepare ourselves to die for something worthy, then we may end up dying for anything. Like the Maccabees and Uganda Martyrs let us have a credible reason ready to die for. We are equerry reminded that we have always to walk in the light of God at all times. Let’s work hard while here on earth for the kingdom to come. Fellow Country people and those of good will let us be a community that is courageous, that believes, prays, witnesses and works for our salvation. Heaven is a reality and not a fiction; it is there for all of us. Like the Holy Martyrs of Uganda we have to be steadfast not to loss the battle of holiness. Ugandans, be holy and capable so that all generations can continue to call you blessed.