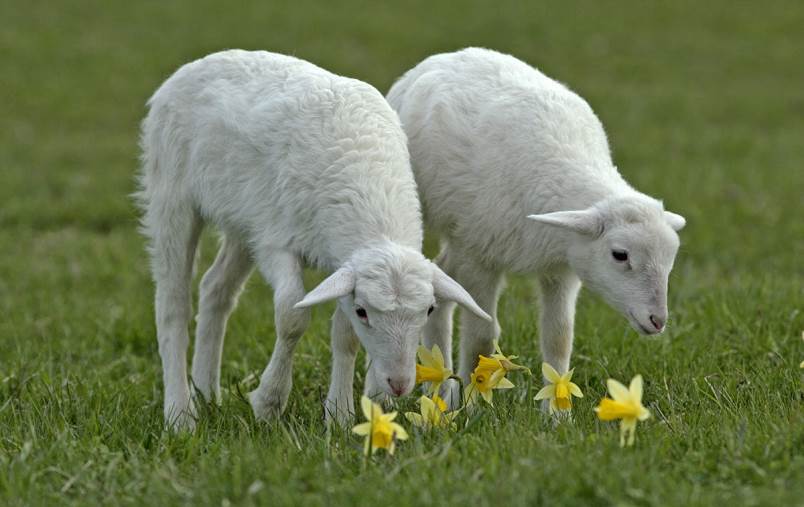 In case you skip ahead to read what is coming next, you might already have noted that next Sunday’s Gospel confirms that Jesus is the Good Shepherd. He knows us. He also assures us that we can hear his voice and when we hear it, we recognize and follow him. Incidentally we seem to be bombarded every day with a cacophony of voices. Some speak the truth and offer enlightenment. Others, although they may have good intentions, speak for themselves. For this reason we need to listen carefully, pray intently and discern wisely which voices we will heed.

This reading presents disciples listening to the voice of the Risen Lord and the Spirit that he breathed upon them. It is also clear that their listening made them so brave to the extent of defying the recognized authorities of their day, claiming that their allegiance lay elsewhere. The term “we must obey God rather than men” Acts 5:29 set them in direct defiance of the law. The Spirit of Jesus led them to understand that even if an issue was lawful, that did not necessarily make it just or moral. We can imagine how those first disciples might have reacted to contemporary laws that permit abortion, the death penalty and just war. They would have raised their voices against such injustice insisting that God upholds life and respects the rights and dignity of every person. The hot exchange from Peter to the members of the Sanhedrin insisted on the truth that God had done for humankind in Jesus. When Peter and the apostles ware reminded to shut up they retaliated stating that they had opted to obey God first.

Peter and company understood that even though the earthly Jesus was no longer present, he continued to be with the community in his risen state and to support their outreach to all peoples. Peter’s bold basis statement about ‘obeying God rather than human beings’ assaulted the ears of the Jewish religious leaders. Peter’s words set forth a fine example of obedience to God as a guide for others to follow. Omitted from this passage indicating how Peter and company were flogged for their preaching cf. Acts 5:40. This harsh treatment only served to convince them that their following of Jesus was authentic and as a result they increased their efforts. Perhaps they remembered Jesus’ promise: “When they bring you before the synagogues and the rulers and the authorities, do not be anxious how you are to answer, for the Holy Spirit will teach you in that very hour what you ought to say” Luke 12:11-12.

In this second reading, John presents himself listening to the voices of many angels who are gathered around the throne of the Lamb singing his praises. The lamb prefiguring Jesus was led to the slaughter without opening his mouth making him worthy of our honor, loyalty and praise. Hebrews had always offered their first spring lamb to express their gratitude to God hopping that their flocks would multiply. This historical ritual continued when the blood of the lamb was used to protect Hebrews from the angel of death and maintained after the exodus.

Centuries later, Prophet Isaiah would present a suffering servant prefigured as a silent lamb being led to the slaughter for the sins of others. John the Baptist would call Jesus the Lamb of God thus evoking not only the suffering servant but also the ram God provided to spare Abraham’s son Isaac. For us Jesus has become the Passover lamb par excellence; through his saving blood, sinners are reconciled and redeemed.

This triple symbolism of the Lamb of God represents Christ as the Sacrificial Lamb who has brought about our Passover from death to life; the suffering Lamb who opened not his mouth and the victorious Lamb of John’s visions. It is this conquering Lamb that overcomes the beasts of sin and evil. The lamb therefore, holds out some consolation to the audience of John’s visions, who were suffering at the hands of the Roman Empire for the sake of their faith in Jesus the Risen Lord. Although their lives were being broken and some were being martyred, they looked forward to their eternal share in the victory of Jesus. At every Eucharist, our appeal to the Lamb of God for mercy and peace joins our voices to all who have gone before us and are already enjoying the celebration we continue to anticipate.

With this beautifully crafted resurrection experience, John is drawing us into a summary of the disciples’ relationship with Jesus. It all begins when he calls and feds them with the bread of his teaching and his very self. During their time with Jesus, the disciples learned that it would become their privilege to share with him the responsibility of gathering others into the unbreakable net of salvation. At first reading of this passage, the universal character of their mission may not be obvious, but science tells us that the number of fish caught in their nets 153 represented every species of fish ever known. Therefore, the disciples were to regard all people eligible for salvation as it had been promised before: “I myself will look after and tend my sheep … I will rescue them … I will give them rest” Ezekiel 34:11, 12, 15.

This apparition story reprises what the disciples had learnt after being commissioned to continue the work that Jesus began. Their induction had come to the end and soon they would be fishers and shepherds who would gather, tend and feed God’s beloved sheep. Peter and the other disciples rose to the task admirably. Therefore we who follow Jesus today are similarly charged to gather, to tend and to feed. Like Peter, we will discover that our individual experiences of discipleship will be fulfilling but fraught with risk.

Peter’s story parallels the story of Jesus; his end is not one he would choose for himself, but an end that he accepted and through which he glorified God. Peter’s story is of profound love, danger and sacrifice for the sake of the good news. In a word, Peter’s story is the story of every disciple whom Jesus raises up out of sinfulness to tend the needs and hungers of other sinners. That voice, in today’s Gospel, invited Peter and all of us to cast our nets into the sea even when it seemed like a waste of time and energy. That same voice urges us to attempt what may seem implausible for the sake of the Gospel. It is love, hope and faith that would make the impossible becomes possible. Just as Peter was asked, ‘Do you love me?’ so are we. Without thinking, like Peter, we are quick to answer, ‘Of course I love you.’ Then the voice of Jesus challenges us to translate those words of love into deeds of love: ‘Then feed my sheep. It is wise to accept the kind of love that anyone is able to give us. To ask for more is to make impossible demands on frail human beings. It is to expect more from life than Jesus did.

When it comes to setting our Christian priorities we ought to imitate St. Peter by announcing loud and clear that it always better to obey God that man. Jesus is the lamb that has been slain to remove our sins forever. We have to forever appreciate the choice God makes for humanity. When Jesus is with us, nothing is impossible to achieve. We are asked mainly to love him. When Jesus asked Peter three times if he loved him, there seemed to be a concealed truth. The threefold profession of love parallels and makes up for Peter’s threefold denial of Jesus. A torrent of tears released his tension while forgiveness released his guilt. We have to always remember that the shortest distance between two friends is a straight question; while the way back is an honest answer. Jesus asks us to be honest if we have to be committed disciples. It is then that we can profess that Lord you know everything and you know that I love you.