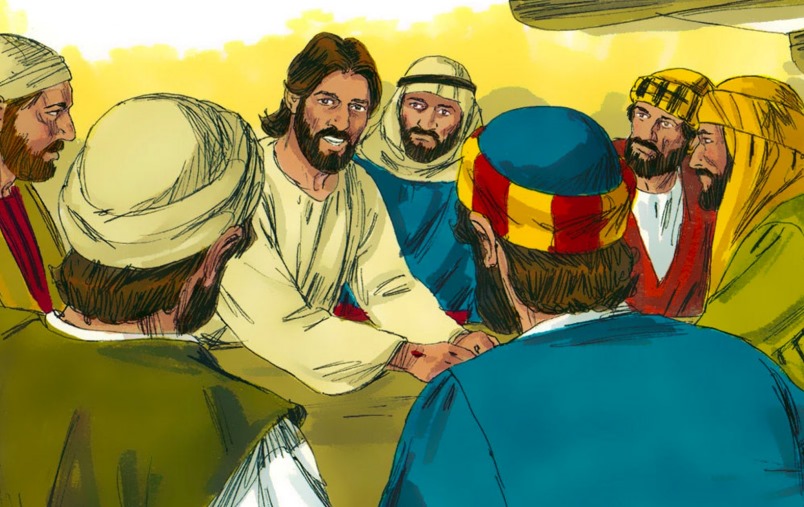 Before departing from his disciples, Jesus promised that the Father would send them the Holy Spirit to teach them how to discern and remind them of all that Jesus had told them. Acts gives us glimpses into this process of discernment and invites us to appreciate the value of diverse voices, even dissenting ones in the ongoing conversation that keeps a community viable.

This reading shows how some in the growing community of believers thought the Holy Spirit was only favoring Judaism with its rites and rich heritage to provide an entry into salvation. These Jewish Christians were proud to tell others, ‘first become Jews to be saved!’ But the Spirit was more accommodative. Just as the Spirit could speak and act in Peter and James, so could He act in Paul, Barnabas, Phoebe, Lydia and Cornelius the Roman pagan soldier that had recently converted. In his opening address at the second session of the Second Vatican Council, Pope Paul VI stated: “The Church is a mystery. It is a reality imbued with the hidden presence of God. It lies therefore within the very nature of the Church to be always open to new and ever greater exploration” Council Speeches of Vatican II, 1.964. The Church is indeed a mystery; it has been her custom to offers to the world a model that supersedes theological and ecclesiological history. The Church always provides an opportunity to grow by encouraging adaptation after discernment.

The issue in this text concerned a disagreement about prerequisites for salvation. Some Jews had insisted upon maintaining their Mosaic dietary laws and traditions of Judaism. But the new comers were put that only faith in Jesus was the sole requisite for salvation regardless of their race, nationality and social status. When the two groups clashed, both were wise enough to submit their differences to the elders of the Church. As presented here by Luke, the Council of Jerusalem represented a watershed moment in the history of the Jesus movement. All of them followed the promptings of the Spirit and arrived at a wise and sound compromise. Their decision respected the sensibilities of the Jewish Christians while welcoming gentile believers fully into the fold. They advised the new converts to refrain from food sacrificed to idols, meat from struggled animals and fornication. Once they arrived at this Spirit-inspired decision, the community grew efficiently. We need to applaud the wisdom of the early Christians for sending representatives from both sides of a thorny issue to deliver a message intended to preserve the unity of the Church. Such a policy is still a good idea even today.

This climactic scene is the last of seven visions that John shared to inspire hope in his persecuted contemporaries. Featured here is the future home of the faithful, the New Jerusalem, bejeweled with the very splendor of God. But unlike the earthly holy city, the eternal city would have no temple; that is, no humanly manufactured edifice that might limit accessibility to the divine. With no temple, there would be no need for cultic functionaries, no sacrifices, no separation between the Holy One and his people. Because of the presence of God dwelling within the assembly of believers, all would be permeated by the unquenchable light of God.

This vision brought forth great hope among early converts as they lived at a time when the magnificent temple in Judah’s capital city was no more. The Temple had been leveled by Titus and his Roman army in 70 A.D; only its ruins stood as a stark ratification of the power of empire. Nevertheless, John persisted in hoping not for the reconstruction of an earthly place of worship but for a meeting place founded upon the presence of God in the midst of the praying assembly gave them hope. With a nod from other visions in Ezekiel 40-48 and Isaiah 60, John affirmed the continuity between the twelve chosen tribes of the former covenant with the 12 apostles of the new and everlasting covenant. Twelve gates that opened in all directions signified the universality of this gathering. His description of the city walls with twelve courses of stones is a reminder of the breastplate of twelve stones worn by the high priest cf. Exodus 28:17; each stone representing a tribe of Israel but now inscribed with the names of the twelve apostles. This eternal city with the presence of God as its only temple would be founded upon the teaching of the apostles through the Gospel. We are invited to offer authentic witness to the Lamb.

In his prologue, John gave eloquent expression to the mystery of the incarnation: “And the Word became flesh and made his dwelling among us” John1:14. The Greek text reads ‘and he pitched his tent among us’ a verb that is equivalent to the Aramaic word for God’s presence/shekinah. Just as the tent of meeting in the desert was the place for encountering God cf. Exodus 25:8-9, now Jesus was the living tent where the Holy One came to dwell among humankind. In today’s Gospel John leads us into a deeper mystery of God-with-us by assuring those who await Jesus’ return are not alone. In the same was as the presence of God was manifested in the desert tent; similarly God had became present in Jesus through the incarnation making the presence of God dwell in every believer through the power of the Holy Spirit.

As Jesus looked ahead to the time when he would depart from his friends, he thus assured them that they would receive strength through the Holy Spirit. This Holy Spirit would bring them peace. ‘Peace’/Shalom’, was the traditional greeting and farewell that faithful Jews extended to one another, offering their best wishes for God’s blessings of harmony, well-being and prosperity cf. Psalm 85:9; Leviticus 26:3-13. To have Shalom in one’s heart, mind and life means that we lack nothing. The concept of Shalom took an added significance with the prophets; the era of the messiah would be characterized by peace, healing and restoration cf. Zechariah 8:9-13. In Jesus, the era of the messiah began, and with it, the peace that had been promised became a reality. For this reason, St. Paul called Jesus “Christ our peace” Ephesians 2:14. As Jesus’ promises of Peace, Presence and the Holy Spirit are repeated in our hearing today, it is important that we appreciate them more than historic utterances from long ago but existential assurances here and now.

The Holy Spirit, our Advocate, is present today. Through the power of this Spirit, we are prompted to bring the Good News of Peace and Salvation to a world so much in need of its truth and its justice. It is this Holy Spirit that stands between us and all the evils of the world. Unless we welcome its movement, all its power goes untapped. Let it be our conviction that the difference between a good and a bad person does not lie in anything that the one wills but in our resistance to the influence of the Holy Spirit. The choice is ours: to welcome and cooperate with Jesus’ gift of the Holy Spirit or to shut Him out and allow evil to have its way.

Today we are invited to allow the Holy Spirit influence our actions and decisions. This will make them universal. The Holy Spirit should always teach, reminding and enlighten our community decisions about membership, missionary activity and fellowship. God is our light, through the Gospels we need to adhere to this truth. Jesus will never leave us alone; the Holy Spirit is present to teach us every thing, let us obey.