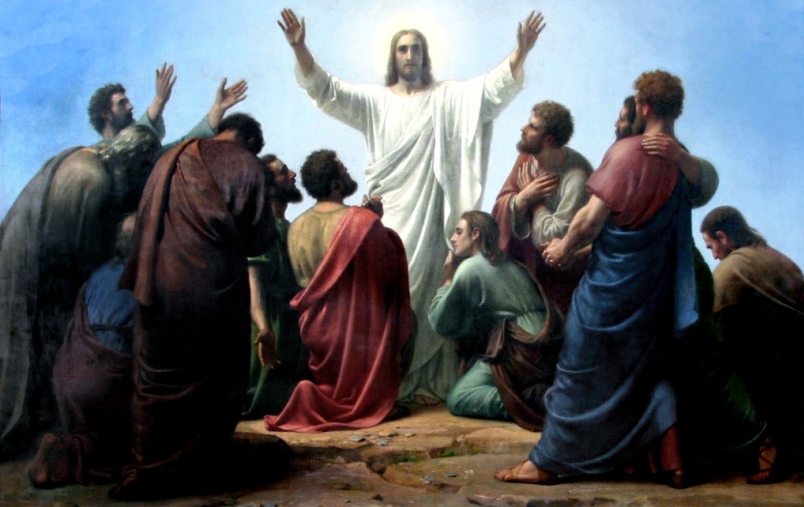 The forty days preceding Ascension were days of preparing the young Church as Moses and Elijah had done for their disciples. Jesus’ departure anticipated his return. He was lifted up by a cloud which took Him from their sight as if he was formless; but this was his nature before creation. Previously, he had manifested Himself physically when the Word became flesh dwelling among us. What we celebrate on Ascension Day is this human departure from this world leaving his disciples the missionary mandate of disengaging themselves from the known to the unknown by moving beyond Jerusalem to the rest of the world.

This first reading begins by introducing a previous Book which is Luke’s Gospel. Biblical history tells us that originally these two books were joined together at Luke 24:49 and Acts 1:6. When the Catholic Church arranged the New Testament Canon books, the volume of Luke was divided into two in the manner which we presently have. Luke recalls how Jesus ordered His disciples not to leave Jerusalem until they had received the Holy Spirit. This promise is still manifested today through the Sacrament of Confirmation. The disciples were commanded to stay in Jerusalem God’s chosen City in which the spiritual Kingdom was to be established. The reception of the Holy Spirit was crucial because He had been chosen and sent by the Father to sustain the Church in her new era. From Jerusalem, the geographical center of sacred history, their apostolic mission was to begin as previously foretold by Jesus. Luke writes this to affirm that Ascension Day is an experience of faith which is so important for all Christians whom he gives a new name Theophilus meaning one who loves God. The figure forty is a biblical symbol standing for a period of waiting. Even in our time, those who have not encountered the Lord in Sacraments are in a period of waiting. Ascension also acts as an assurance to the disciples who had run away during the Passion Week that not all was lost; their reassembling in the Sinai desert re-qualified their commitment to remain his authentic disciples to the end of time.

The Holy Spirit would accompany them every where they would go even to the most difficult places. For a good like the Kingdom, the Apostles wanted all promises accomplished immediately so that at his return, Jesus would take them to his place. However Jesus removed this illusion by stating that the Kingdom of God would not be a rapid and easy task. Salvation has already begun and will be successful, but its growth would be slow like development of a seed. The followers of the risen and ascended Lord are supposed to be optimistic, looking at what can be done on earth so as to transform it; that is why the task assigned to them is “You will be my witnesses” Acts 1:8. Christian faith ought to act as a stimulus to assist believers to commit themselves concretely in transforming conditions of humanity so that issues of oppression, war and poverty which still terrorizing our society may give way to prosperity, justice and peace. With the baptized the risen Lord transforms society.

Paul prays that God may grant wisdom to Christians to understand the mystery of the Church which is to open humanity to great hope. Christians are responsible citizens with a vision to achieve better life while waiting for Christ’s return. St. Paul say, “I pray that the God of our Lord Jesus Christ, the Father of glory, may give you a spirit of wisdom and revelation as you come to know Him” Ephesians 1:17. True Christians are expected to make good things happen wherever they find themselves. A Christian has immeasurable power that is able to unite where once there was division, to heal where pain once existed and to forgive where condemnation once thrived. A Christian must be a unique person always performing above average.

The metaphor of the Church as the body of Christ serves not only to affirm its unity but also grounds her in the power of God. Christ is the head while the Church is the body through which He works. The Church is quite literally the hands that do Christ’s work, the feet that run his errands, and the voice that speaks his words. In summery, Ephesians prays that God grants us wisdom to understand this mystery. Today all our senses must be opened to this great hope. A Christian should not overlook practical concrete responsibilities which are a duty in daily life.

As recounted by St. Luke, the Ascension of Jesus is both an end and a beginning. At an end were the three years of companionship with the earthly Jesus; also concluding were his resurrection appearances among his disciples and the opportunity for final instructions. Ending, too, was the second stage in the story of salvation as perceived by Luke. The first of those stages was the period of Israel, from Moses to the appearance of John the Baptist; the second was the period of Jesus’ ministry, from the inauguration of his public service to his ascension. That period was now ending, and the stage was set for the beginning of the final era of salvation history, in which we still live: the period of the Church.

Luke describes the mission of the Church as an intended part of God’s preordained plan of salvation and as such, a mission that would be empowered by the Spirit. Seemingly, the disciples had not understood the nature of their mission meaning to preach repentance and forgiveness of sins and even its dimensions to all nations. Indeed, it took repeated revelations and prodding by the Holy Spirit before the disciples became aware that God accepts all without partiality. In fact; right within this brief ascension narrative we find two major issues with which the early Church had to struggle. The first was to come to terms with a suffering and dying messiah; the second was to accept non-Jews into their faith fellowship without distinction. Jesus knew that neither the message nor the universal scope of their mission would fit the natural inclination of his followers. They were not ready to carry forth a message shot through with pain and suffering, neither were they ready to spend themselves on a worldwide mission. Consequently, they were told to wait for a power greater than themselves to open their minds, prepare their hearts and warm them to service.

After Ascension, Jesus is no more a prisoner of death. Due to this, death is no longer a frightening event because Jesus has transformed it into a birth into new life in God. This is the message that makes the disciples rejoice even in the most dramatic and complicated situations. Ascension is Jesus with us but in a transformed manner. His presence is still real and it has even multiplied. This joy is sustained by the power of the Holy Spirit. He commands them “stay in the City until you are clothed with power from on high” Luke 24:49. This is a fundamental requirement on our journey of faith. Ascension calls us to repentance for forgiveness of our sins. Despite being in his risen body, almost invisible to the human eye, Jesus gives a blessing that makes them realize that they are cooperating with the divine plan. Luke emphases the importance of the Holy Spirit who even today continues to be the essential agent and protagonist of mission by propelling the Church into places where it might not otherwise have gone. Such a power is disturbing. Nevertheless, it is the disturbance of the Spirit that keeps the Church alive, active and attuned to the signs of the times. Ascension is not the change of physical place but the passage from this world to the Father.

After they had worshipped the Lord and he had departed from them, they returned to Jerusalem full of joy. What is this Joy? It is the catechetical message that awakens faith. When the community shares about Jesus their hearts should be exalted to the extent of seeing it alive. Let us ascend above our spiritual dormancy, unfaithfulness to the gospel, laziness towards sacraments, indifference to social responsibilities and set the world on the fire of his love.

Today on the feast of Ascension we are encouraged to be Theophilus meaning one who loves God. With love nothing is impossible. Paul reminds us to pray continuously for wisdom to remain instruments of good and visible and sustainable transformation. The Holy Spirit is the source of our joy as He encourages and teaches us every thing; let us receive Him. Let us pray: Empower us, Lord; send your Spirit to perturb and disturb, lest we lose sight of your purpose, lest we overlook or ignore your people, since in you is the only way to our salvation. Amen