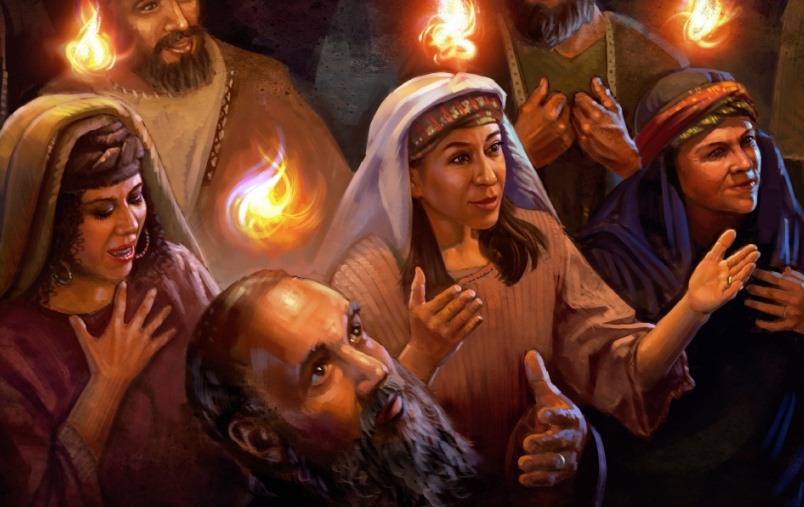 Today as a Church we celebrate our birth day. Despite the challenges, the endurance of discipleship has made us his witness making the Church to survive and thrive! Unlike the survivors of televised notoriety who go it alone, we endure in unity because of the Holy Spirit who does not permit us to relegate our distant memory to history books. The Holy Spirit empowers us to be pertinent and relevant to the changing circumstances of our time. The moment Jesus gave us the Holy Spirit; our hearts were set on fire. Through the gifts of the Spirit, the alienated have been offered an alternative communal life with a clean record of love and care.

Today we celebrate the pioneers who were the first to be identified as Church. These historicals of Jesus of Nazareth took the risk and became the first members of the Jesus movement. Their willingness to risk themselves and their security enabled them to explore and go forward into the unknown without the benefit of a roadmap or any sure guarantees. Because those early believers had the guts to venture beyond Judaism and Jerusalem, their daring changed the cultural complexion of the Church. No longer simply a sect of Judaism, Christianity became an international community, a melting pot of unique cultures and peoples unified in Christ.

The diversity of this new community is clearly evidenced in today’s first reading where Luke describes those who listened to Peter as hailing from “from every nation under heaven” Acts 2:5. Luke also affirms the intended unity amid all this diversity, as he attests that all present heard what was being proclaimed in their native tongues. This perfectly depicts the ongoing tension between the Spirit’s disruptiveness and its power to unite. Though the Spirit arrived in the midst of noise, wind and fire, each an unsettling element; all were able to comprehend. The Holy Spirit is still the force that empowers the disciples to speak to the crowd in such a unifying way that everyone hears them speaking in their ‘own tongue about the marvels God has accomplished’. This original methodology ought to continue happening now.

As we celebrate the gift of the Spirit and the birthday of the Church, St. Paul sets before us both the diversity and the unity that characterized the community of believers. Diverse gifts given by one Spirit are intended for the good of all. Members who had different genders, social status, ethnic origins and backgrounds became one by virtue of the one Spirit from whom all partake one baptism which washed them clean. St. Paul points out two strong claims that the bible and tradition make upon us as believers: We are a community that serve common good. That is why faith really matters to our new generation. In our consumer culture, it is easy to worry more about ourselves, to become individualistic, to use others for personal gain. But the Christian call is to move beyond oneself by giving and receiving love and form a community that works toward the transformation of its members and society. Though a variety of groups continue to exist among us; clearly, human society hungers for communion, mutual exchange and support among its members. Paul understood that people’s hunger for such a union and support is truly satisfied only by belonging to Christ and surrendering to the workings of the Spirit. The authenticity of one’s belonging and surrender, insisted Paul, can be determined by professing that Jesus is Lord.

Those willing to make this confession are speaking under the inspiration of the Spirit; those who deny Jesus’ Lordship are not. Of course, this simple criterion cannot resolve all questions or settle all disputes, but it can awaken the community to the need for critical discernment. Before being able to declare, ‘Jesus is Lord’, the Corinthians had to leave behind a pagan past and commit to Jesus. Their confession meant that Zeus was not Lord, nor was Caesar or any other gods or goddesses to which they may have ascribed. Their example and Paul’s wise counsel invite us to ask ourselves: Who or what must I leave behind in order to declare truthfully, with my lips and with my life that ‘Jesus is Lord’? Who or what must I leave behind in order to immerse more deeply of the Spirit, so as to witness to the world that true communion with one another in Christ is possible? When we receive the Holy Spirit, the impossible becomes possible.

In today’s Gospel, Jesus is featured as the giver of the Spirit by breathing into his own the life force that will sustain and empower them to continue his mission until he returns. This mission restores peace and forgiveness on a fractured and fragile world. His commission to the disciples is that they have to be his witnesses and reshape the world. This great commission, combined with breathing forth the Spirit upon them, signaled a new creation with new possibilities of peace, forgiveness and mutual communion opening up. It is this day that set the direction for our life. Without Pentecost, Christ’s work would have been incomplete. It is Pentecost that makes call ‘God’ as ‘Abba’. When we grow up with the idea that the Church is an institution we end up preferring the Holy Spirit at exam time. Thankfully, the early Christian community never thought itself as an institution. We know from their writings that Jesus’ first followers regarded themselves as parts of his body, a community of believers carrying on his work and daily participa­ting in his death and resurrection.

The first Christians didn’t conceive of the Holy Spirit as someone who helped them create dogmas; they regarded the Holy Spirit as an amazing, essential power helping them to live their life as a force responsible for all the contradic­tions that good communities embody. Paul carries on the same theme in Corinth where a few Corinthian faithful were using their individual gifts of the Spirit for their own personal benefit. The apostle writes: “There are different gifts, but the same Spirit ... different ministries but the same Lord ... different works, but the same God. ... To each person the manifestation of the Spirit is given for the common good” 1Corinthians 12:4-10. After greeting his Easter-night disciples with the great commission: “As the Father has sent me, so I send you!” John 20:21 immediately breathed on them, saying, “Receive the Holy Spirit. If you forgive anyone’s sins, they are forgiven; if you hold them bound, they are held bound” John 20:22-23. Jesus’ gift of the Spirit empowers us to forgive one another. The mention of holding someone’s sins bound is a reminder of what happens when we don’t fall back on the Spirit.

The short life and awful death of Jesus can be taken as a blip on the secular screen of history. After Jesus died, Herod remained king, the Romans kept occupying the county, the drachma retained its value, the poor stayed poor, the Jordan kept flowing into the sea, religion and politics resumed their incessant, uneasy truce. In order to find one single difference that Jesus made in the real world, you had to follow the winding streets of Jerusalem to a certain private home and climb the rickety stairs to the upper room. There you would have discovered eleven men and one woman gathered together in an uncertain mixture of fear and hope. They had gathered secretively to decide what to do about their friend Jesus. All the other disciples had melted into the countryside and found some way to pick up their old lives. This group of twelve was in for a rather bigger surprise. After receiving the Holy Spirit, rather than going their separate ways, they got convinced and bond together into a permanent community. They decided to witness to everyone that Jesus was the personal, permanent presence of God in the world. This insignificant band of believers gradually spread to the ends of the earth; they were successful not because they were smart, rich or powerful but because people who met them kept saying, ‘see how they love one another’. This incredible memory brings us back to the Church here in our own country and. St. John XXIII once said that as a Church, ‘we are not on earth to guard a museum, but to cultivate a flourishing garden of life’ therefore we are called to be disciples.

Pentecost marks the birthday of the Church; it is the day when the Holy Spirit descended on his first followers and encouraged them to spread the good news to the ends of the earth which is still our mandate today. This is the day which reminds the whole world that it is one single family of God meant to make the world a better place to live in. We are called to be a Pentecost people who have many languages but one mind, many races yet one family.