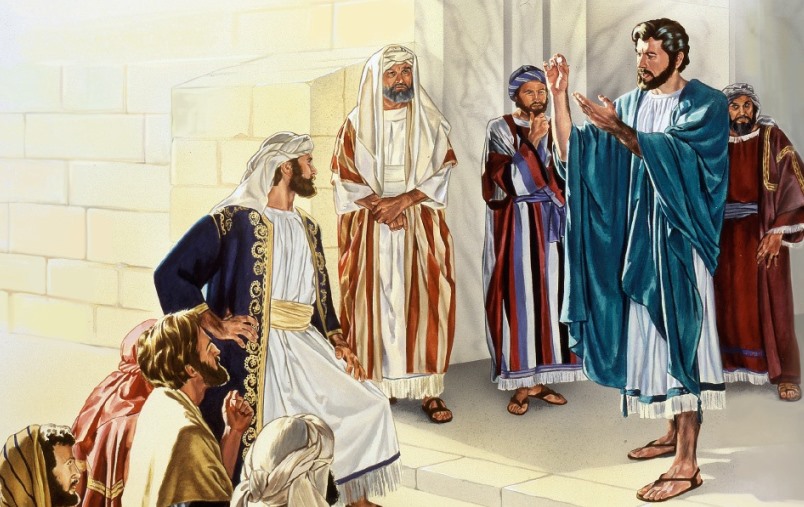 One of the saddest human experiences is the death. Whether that person is four or forty years, the grief of those who suffers such a loss is psychologically staggering that mourning may continue for years. As difficult as death is, even more unbearable is the death of a relative who is not sustained by any belief in life after this physical life because their grief is beyond consolation. Faith in eternity is the only way to live our lives with courage.

The brothers and their mother who are featured in today’s first reading were tested and did not surrender their faith. At a time of great persecution, they believed in life after death and clung to it with a tenacity that was contagious. Each brother strengthened the other with his witness to the extent that their pain gave way to courage of accepting martyrdom however horrible, cruel and unjust it happened. In this belief lay their hope that life can be killed but never destroyed. We who hear the story of these brothers are inspired to make hope our sure shelter.

We need to learn that hope works in these ways. It looks for the good in people instead of harping on the worst; it discovers what can be done, instead of grumbling about what cannot; it regards problems as opportunities; it pushes ahead when it would be easy to quit; it ‘lights the candle’ instead of ‘cursing darkness’. If ever anyone had just cause to grumble, it was this family of misfortune to challenge the regime of Antiochus Epiphanes IV. A tyrant Greek ruler of the Seleucid dynasty during the second-century B.C attempted to affirm his authority by forcing Greek culture on the entire conquered territory. This reading illustrates some of the atrocities that were perpetrated on those who refused to comply.

In telling the story of the seven brothers and their mother, 2 Maccabees presents heroes whose example encouraged believe in One God. This spirit of resistance fostered the formation of a group known as Hasidim/pious ones who became fierce defenders of the law, liturgical rites and traditions of the Jewish people. Faith heritage is so precious that we can’t surrender it for anything. This movement eventually erupted in a successful rebellion led by Judas Maccabeus around 167 B.C and won the war against their oppressors. Faith in the resurrection became powerful weapons against the enemy. If the story of seven brothers and their mother is read in its entirety, it becomes clear that this is more than a gruesome narrative about human depravity; yet now the traitors are dead while martyrs are alive.

When Paul wrote to the Thessalonians, he spoke of hope as a grace from God to encourage and strengthen believers. Paul had great hope when he first preached the good news in this Greek city; he hoped that his message would take root in his listener in turn would carry it with them and preach it through their words and works to all the surroundings. This they did, but not without encountering the careless who ridiculed their faith, criticized their lifestyle and threatened their existence. Despite the opposition they faced, Paul’s converts in Thessalonica and elsewhere lived their lives not under the burden of threats but in the clear light of hope. They could face even death as Maccabee brothers and Paul did with the confidence that life would continue forever. For us Christians, hope is the thing with feathers that perches in the soul and sings tunes without the words that never stop. Hope empowers the one who hopes to take flight and to soar above the struggles of life to a place of peace with God.

Paul insisted that hope, love and everlasting encouragement were gifts from God that he wished for past, present and future generations. This is the first of the three prayers that comprise today’s second reading. In the second prayer, St. Paul asks for prayers for himself and his ministry. Aware of the struggles that can weary even the most avid disciple; he knew that he needed the support of a praying community. Similar in tone, the third prayer petitioned God to keep the community in Thessalonica constant in their efforts to live according to the Gospel Paul had preached to them. By their prayer, the community also participated in the continued missionary work of their founder. We are encouraged to be hopeful at all times.

Until the second century B.C., the general consensus among Jews was that this life was God’s gift to be enjoyed fully and as long as possible, since one’s name lived on in the many children God would bless the righteous with. After this life, there was only a vague, insubstantial image lingering in a place called sheol/netherworld. But with a unique revelation from wise thinkers, Judaism arrived at a belief in the continuity of life after death. However, joyousness or lack of  this eternity hinged upon God’s just judgment of both the good and the evil.

For their part, the Sadducees did not accept as revelatory any biblical book beyond the Torah; therefore, the notion of resurrection did not lie within their purview. The questions they posed to Jesus weren’t motivated by a willingness to learn but by their desire to expose him as a fraud and his teachings as without merit. In their confrontation with Jesus, the Sadducees questioned him on the levirate law. Referenced in Deuteronomy 25:5 and Gen 38:8, this law provided for widows and their children. Without a husband or father to speak and care for them, the lot of these poor ones was a sorry one indeed. Therefore, they were protected by legislation that encouraged the deceased husband’s brother to inherited their mother and care for them. But the Sadducees devised a protracted and most improbable reductio ad absurdum argument in which one husband after the other died. To which husband would she belong in the afterlife?

Jesus was not cowed by their argument or sucked into a pointless debate. He used the occasion to explain that the resurrected life is not a mere continuation of this life; therefore the law is no longer normative. In an entirely new and transformed existence, those who rise from death are no longer bound by human institutions and traditions. For that reason, the Sadducees’ question was pointless and their argument moot. Then challenging his listeners to open their minds to developing truths, Jesus quoted from the Torah. Citing the Sadducees’ greatest mentor Moses, Jesus explained that during the theophany at the burning bush in Exodus 3: 1-6, God was identified as the God of Abraham, Isaac and Jacob. Although these had departed from this world time immemorial and were presumed dead, they must somehow be alive because God is a God of the living! Whether the Sadducees accepted Jesus’ challenge to believe in the resurrection we do not know; but for us, these words encourage us to keep hope alive.

There will be losses in our lives; there will be times of devastating doubt when we wonder: Why? Why do people die young? Why do our loved ones suffer? Why are the innocent persecuted? How come no one seems able to do anything to stop evil? In such times, the words of Jesus and the experiences of those who have gone before us in faith call forth our hope because ‘if it were not for hope, our heart would break’. Through these words, Jesus encourages us to reaffirm our own belief and to allow it feed and fire our hope in everlasting life.

Death is never easy; the untimed and unknown end of life is a fearsome, but we should never surrender to despair. Faith confirms to us that we are Children of the resurrection. Even in the face of death we must be confident that our Father is God of eternal life. We need to avoid the tendency of being born tired. Let’s work well and hard here on earth for the kingdom to come. We must be a community that believes, prays, witnesses working for our salvation. Africans, heaven is there for you, like the Twenty four and plus Uganda Martyrs be steadfast not to loss the battle of holiness. Be holy and capable.