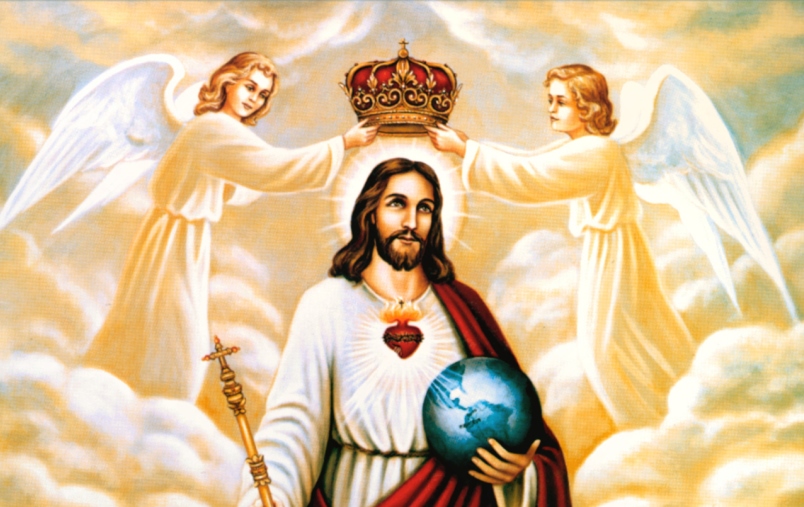 As we come to the end of our Liturgical Year, the Church invites us to celebrate Christ the King as Lord and master of our lives. This Feast was instituted by Pope Pius XI in 1925 to deter secularism and atheism that was becoming wild. Faith demands that we celebrate Christ as sovereign over all nations.

The first Christian creed stated that ‘Jesus is Lord’ although he never held political office, no special academic degrees and little cultural influences. He died at age 33 on an instrument of punishment as any common disobedient person of his time, yet his reign is forever because he is God. Today’s feast puts us in touch with the sublime strangeness upon which Christianity rests, yet a paradigm shift because Jesus is a mystery of faith.

The people of Judah had anointed David as their king at Hebron; seven years later, the people of Israel pleaded with him to be their king too cf. 2 Samuel 2:1-4. Prophet Samuel reports the language they used to convince him. They were of his flesh and blood and even in time of Saul, he had been their real leader. It was God’s wish that he should be their shepherd and ruler.  This popular acclamation of David as king and the acceptance of Christ as king by a solitary criminal is sticking. David was a powerful king and faithful to God. After his anointing as King over Israel, Prophet Nathan said to him, “your house and your kingdom shall be made sure forever before me; your throne shall be established forever” 2 Samuel 7:162.

This blessing did not deter surprises. Judah and Israel fell captive to Assyrians between 8th and 6th BC respectively. Even when they later returned to Israel no monarchy was re-established; instead they had to live under occupation by Greek and Roman Empires for five hundred years longing for a powerful king to liberate them from their oppressors and lead them justly. During occupation they had to look to Scriptures for inspiration that one day a Messiah would set them free. The prophecy of Nathan stated that the kingdom of David would be established forever and that God would send a just and powerful king to rule over them. This backs our feast today.

The thanksgiving with which Colossians begins is a quotation from a baptismal hymn. God is thanked for transforming us from darkness into the kingdom of his beloved son. This Jesus who died in mockery on the cross, is the one in whom the fullness of God dwelt and who became the means of redemption and reconciliation. Paul’s letter to the Colossians and the Prologue of John’s Gospel are the strongest statement made about Jesus in the Bible. Listen again to what he says: “He is the image of the invisible of God” Colossians 1:15. You want to see God? Look at Jesus. Through Him all things were created in heaven and on earth, those that are visible and the invisible. “Thrones, Dominions, Principalities, Powers, all were created through and for Him” Colossians 1:16. Jesus is the head of the body which is the Church. This high praise refers to Jesus the Word who governs all things.

Christian spirituality is rooted in the paschal mystery. The reading from Colossians shows Jesus as the one who has reconciled all things to God by shedding His blood on the cross.  Jesus is the firstborn in the order of creation because He was not created. He was there from the beginning. He is the image of the invisible God. Christ is both the helper of God in creation but also the one who holds all creation together. He is the firstborn in the order of redemption in that as Incarnate Word, He was conceived without original sin. Christ has been pivotal in God’s design for bringing humankind back into right relationship with God. He is the firstborn from the dead and the fullness of divinity in which He dwells to bring about reconciliation on a cosmic scale. The reconciliation he has effected involves not only humankind but the whole of creation.

This Gospel provides a shocking presentation. Keeping in mind all we have read from Colossians, lets move ahead to Luke’s Gospel; where do we find the King of Kings! in a garbage dump outside Jerusalem. From 30 A.D, that is what Golgotha was; a dump where they executed common criminals. We find a young man pinned to a cross in His death agony surrounded by a brutal band of soldiers specialized in putting prisoners to death. His followers had abandoned Him. He is alone, stripped naked and pinned to the cross. The ruler sneered at him. “He saved others …..let him save himself” Luke23. Soldiers jeered and made fun of Him, giving Him their sour wine. “Save yourself King of the Jews?”Luke23: 38. People shook their heads and laughed. While the disciples longed for a powerful king of majesty, Jesus revealed himself to be a king who would be glorified only after suffering and dying on the Cross. The man who the disciples hoped was a Messiah of power turned out to be a Messiah of self-sacrifice, suffering, forgiveness and healing.

This Gospel therefore portrays Jesus as king by the manner of his death. The kingship of Jesus is shown in the resolute manner in which he faced his passion and death, the forgiveness of his executioners, the granting of eternal life to the repentant thief and the trust of Jesus before he died. The Gospel also shows us Jesus as a king who was willing to suffer for us out of his great love. The king who lives in eternal glory is a God of self-sacrifice and forgiveness.

This is a unique perspective into the life of Christ as the Suffering Servant. On the Mount of Olives Jesus is in agony which comes from the Greek word agonia. Agonia in Greek describes the supreme tension of the athlete covered in sweat before the start of the contest. In the Mount of Olives Jesus prepares himself to begin the passion. Jesus shows a God-given tranquility given to the one who has been given all things and the human tranquility of the one who is innocent as he answers the questions of the Jewish authorities.

Both King Herod and Pontius Pilate witness to the innocence of Jesus. Throughout his passion Jesus is shown to silently accept the suffering that he undergoes. It is clear that Jesus suffers for nothing he has done but instead as a result of the deception of the religious leaders. He does not fight back and yet is in control of his destiny.  The first words of Jesus at the place of the Skull are ‘forgive them Father for they know not what they are doing’. Only in Luke’s Gospel does Jesus forgive his executioners from the cross. Jesus lived out the forgiveness of others that was central to his teaching. Another event from the cross that is unique to this Gospel is the promise of paradise to the repentant thief. In the account one criminal reviles Jesus and asks him to come down from the cross. The other criminal recognizes that Jesus is innocent and that Jesus is Messiah. He asks Jesus to remember him when he comes into his kingdom. Jesus not only remembered the ‘good thief’ but also promised him heaven.

The kingship of Jesus is finally shown in the way that he passes from this life to Father. Unlike the other Gospels which focus on the suffering of Jesus, the last words in Luke’s Gospel are not words of abandonment but instead words of trust, ‘Father into your hands I commend my Spirit’. Jesus shows himself to be a king who knows that he is in his Father’s hands as he dies. The crucifixion is clearly a moment of God’s forgiveness and healing grace through and by Jesus. He shows himself to be a king who is willing to sacrifice for others and who brings salvation through the restoration of God’s people through forgiveness of sins.

Jesus Christ in King with or without us, it is our obligation to request Him to be and remain our King and Lord forever. We have been created free of charge, yet we are here with a responsibility of loving, praising and adoring Him because He is irreplaceable. Our King reigns on a special thrown the Holy Cross; we are invited to embrace our own small and big cross and follow Him. Let us pray on this feast of Christ the King that our lives will be transformed, and we will see this great transforming person who is God the Word made flesh.