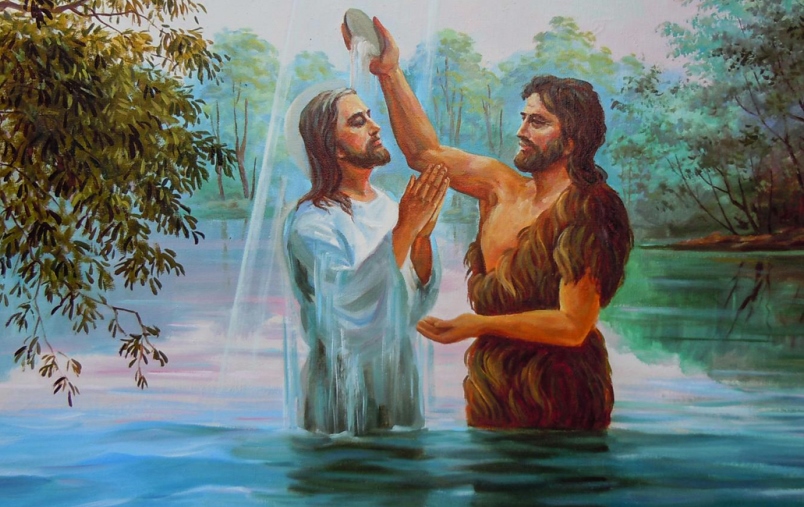 Theme: Christ is the anointed

Each year, Mother Church reminds us of the baptism of Jesus granting us an opportunity for remembering and celebrating our own baptisms in Jesus’ name. In the process of rethinking the importance and significance of this sacrament we ought to keep in mind that Baptism is not a final goal, but the beginning of a lifelong process of becoming one, with Christ, in Christ and for Christ.

From the figure of the faithful servant we are taught that baptism is a call from God whereby those who are chosen are endowed with God’s spirit and are also formed and equipped for the service of others, particularly the needy members of the human community. It is a fact that most people are bothered by passages of Scripture which they less understand; but as for me, yet it better to realize that the passages which trouble us most are those which lift us up. This passage from Isaiah is one of those ‘troublesome’ ones. As one reads it will recognize that it is among the series of four songs cf. Isaiah 42:1-4, 6-7,49:1-6, 50:4-9, 52:13-53:12 which set forth the ‘job description’ of the unnamed saving servant. As we reflect on it we need to comprehend that the personal qualities and job description therein were fully realized in the suffering and death of Jesus. When we are baptized in His name we also need to understand that Christ’s ‘job description’ of selfless suffering and saving service has set the pattern for our own. Trouble notwithstanding, we are also assured that like Jesus, we are empowered by the Spirit of God to do the demanding task ahead.

This biblical concept of justice means ‘fidelity to the demands of a relationship’ which requires us to follow Christ’s footsteps to promote and protect a network of equitable, trusting, life-giving relationships whereby every member of the human community is united with others by familial and covenantal bonds. At the heart of this network is the important relationship with God from which all other relationships must necessarily derive. Justice which is rooted in God is not achieved through political machinations or military might. Contrary to popular messianic expectations, the Servant and those continuing his mission have to fulfill the work of justice with gentleness and caution. Careful not to further damage “the bruised reed or quench the smoldering wick” Isaiah 42:3. This Servant respects persons who are weak, fragile and in jeopardy. His way of bringing justice matches the goal which he enacts since the means serves the end. Besides being empowered by the Spirit, we are “grasped by the hand” Isaiah 42:6!

Through the insights of Peter and the experience of Cornelius, we learn that baptism is a blessing available to all who respect God and live in a manner consequent with and reflective of that reverence. Luke also informs us that from the time of his baptism by John, Jesus spent his time healing and doing good in God’s name and by doing so he has set an example for all baptized. Although, he had been endowed by the Spirit and held tightly by God’s grace, Peter was initially reluctant to reach out and grasp the hand of Cornelius in fellowship and love.

Cornelius was not only a gentile; he was the enemy, a Roman soldier stationed at Caesarea, the headquarters of the occupying forces in Palestinium [Rome’s name for Judah]. In the rank of centurion, Cornelius functioned as the commander of one hundred men. In any case Cornelius is described by Luke as “devout and God-fearing” Acts 10:2. In biblical language ‘God-fearer’ was a technical phrase for gentiles who, weary of the immoralities of their ancestral religions, had attached themselves to Judaism. Though not circumcised, they attended synagogue, believed in one God and accepted the ethics prescribed by the covenant. Moreover, Cornelius had distinguished himself as a person of prayer who gave alms generously to those in need. Nevertheless, Peter had grown to maturity in a tradition which believed that it is the rite of circumcision set its members apart from the rest of the peoples of the earth. As is reflected in Acts 10:11; Peter had not yet fully understood that by virtue of his initiation through baptism, he was no longer to claim any superiority over others or to separate himself from them; rather to accept and welcome them as members of the Body of Christ. He was also to learn that faith and ethics and not ethnicity make a person acceptable to God.

By virtue of his interaction with Cornelius and by God’s intervention, he had a vision showing him that he should “consider nothing unclean” Acts 10:28. Peter declared ‘he began to see’. Luke’s use of the present progressive verb, hypolambanomai, indicated that the long process of accepting gentiles into the Church without imposing circumcision and Mosaic Law had begun; though it would still be a work in progress. Indeed, there is clear evidence in Acts 15:6-21 that the issue was not that easily or rapidly resolved. Shortly after Peter’s visit to Cornelius’ home, he was confronted by some shocked members of the Jerusalem Church who resented the fact that he had “eaten with the uncircumcised” Acts 11:1-3.  Although he defended his actions, Peter yielded to the pressure of the Jerusalem elders and reneged; for this, he was castigated by Paul as reported in Galatians 2:11-21. Only gradually and with difficulty did Peter’s insight into God’s universal plan become the accepted norm for the Church cf. Acts 10:34-35. This universal welcome and inclusion remains the accepted norm for the Christian community until now. Today’s feast of baptism of the Lord challenges us to allow this insight to grow and remain visible within us transforming us into unique people.

While the baptism of an individual is usually a joyous occasion celebrated in the family, friends and the Church; the baptism of Jesus was a source of anxiety for the early Church. Since John’s was a baptism of repentance, why would Jesus, who was sinless, participate in a rite for sinners? Then also, why would Jesus who as the anointed of God, the messiah who exercised a clearly superior role in God’s plan of salvation submits to the authority of his subordinate? Moreover, the fact of Jesus’ baptism by John seemed to support and affirm the beliefs of those who claimed that John was indeed the messiah and fully aware of the Shristological and theological controversy surrounding Jesus’ baptism; each evangelist did his best to present it as favorable moment introducing Jesus into public ministry. For his part, Matthew shaped his account in such a manner as to: 1) clarify the roles of John and Jesus; 2) emphasize Jesus’ messiahship as foreordained by God and foretold by the prophets; 3) inaugurate the mission of Jesus; and 4) proclaim the dawn of the messianic era. Matthew is unique in indicating that John recognized Jesus as the promised messiah before the baptism took place and even objected to baptizing Him “I should be baptized by you, yet you come to me!” Matthew 3:14, but Jesus insisted and received baptism, explaining that “it would fulfill all of God’s demands.” Matthew 3:15. First of all, Jesus submitted to baptism in order to express his humble acquiescence to God’s saving purpose and to set an example that sinners should follow. Secondly, His baptism was an outward sign that made redemption accessible to sinners as clearly articulated and clarified by the voice from heavens.

The voice, bath gol/‘daughter of a voice’, was a term which referred to the means by which God’s purpose was revealed after prophecy had ceased. The ‘sky opened’ and the ‘spirit descended’ further signifying that a new conversation between God and humankind was about to begin in Jesus. The identification of Jesus as beloved and favored Son combines three phrases from Jewish tradition: “my Son” Psalm 2:7 which means that the Davidic king was declared the adopted son of God, the “beloved…. Isaac” Genesis 22:2. God’s Servant “with whom I am well pleased” Isaiah 42:1. Called and chosen by God and endowed with the Spirit, descending like a dove, Jesus exercised his saving mission as Son, Servant and King. Besides representing the Spirit, the dove present at Jesus’ baptism had further significance. It was a figure for a new Israel, a new people of God which was being formed through the person and mission of Jesus. Through our baptism in his name, each one of us becomes a member of the New Israel and a sharer in Jesus’ saving service to the world. By virtue of today’s feast therefore, each one of us is renewed in the significance and blessedness of God’s grace, thereby being challenged to go forth from this celebration to live more fervently committed to Christ, the Church and the world.

Today’s feast reminds us of our own baptism which makes us citizens of heaven. By Baptism we are cleansed from original sin thus given passport to enter eternity. We need to keep memory the day when we were baptized and to celebrate it as the true birth day into a new people of God. We are followers of Christ because we are baptized. As Jesus we are anointed with the Holy Spirit through the oil of chrism. Because of our baptism we are all united in Jesus and that is why Paul in his teaching confirms that: “there is no longer Jew or Greek, slave or free, male or female, you are all one in Christ” Galatians 3:28. Our vocation since baptism is to witness Jesus to the world. I conclude with a reference to some instructions for the newly baptized at Jerusalem. ‘It is right to call you ‘Christs’, you have become ‘Christs’ by receiving the sign of Holy Spirit’. When you emerge from the pool of sacred waters you are anointed in a manner corresponding to Christ’s anointing. Act, look and behave as anointed people.