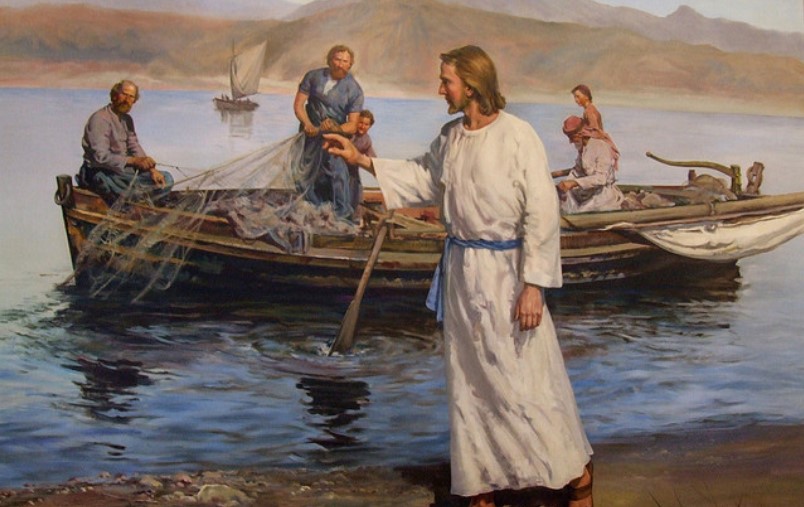 Theme: Those walking in darkness have seen a great light.

Apart from those who live in the polar regions of our planet Earth, most peoples experience day and night on a daily basis. In addition to the routine occurrences of sunrise and sunset, there are other experiences of light and darkness which assist us to understand today’s scripture readings presented in rear  eclipses of the sun and moon which misconstrued fear among the people of old due to abrupt unexpected general darkness over the earth. Before these phenomena were understood by scientists, eclipses were regarded as portents of evil interpreted as Earth in crisis. Survivors of wars narrate dreaded blackouts whereby all was darkened preventing the enemy from detecting targets for their attack. For the Hebrews, this was only done by the power of God because He is able to render surprises.

Around 700B.C, the northern kingdom of Israel met with battle, defeat and slavery. Prophet Isaiah brought the good news that God would reverse this and bring light and joy instead of the darkness that was overshadowing them. The survivors would rejoice as if they were sharing harvest of spoils. In particular he focused hopes on a future king. This king would combine all virtues of the past Israel’s rulers which were too good to be true until they were embodied in Jesus Christ. On our continent today we can assert like Prophet Isaiah that by majority we are still a people walking in darkness who long to see the light. True light is Jesus Christ who alone possesses exceptional qualities because He is wise more than King Solomon; He is a Wonder Councellor, a Prince of Peace. He alone establishes Justice and Integrity. He is valiant like David. He is a brave warrior against evil and sin and a loving God. He alone is able to break the yoke that burdens us. He is neither violent nor cruel. Before him all war gear is destroyed.

Christ began a new era of peace, justice, brother/sisterhood for all. If we honestly collaborate with Him, then peace, integrity and prosperity will prevail. Off course these new qualities that the new King presents have to raise some questions in our minds such as: with the coming of the messiah, how are we solving our problems of poverty, hunger, disease, conflicts and ignorance? Seemingly they are increasing! Have we truly become peace loving or are we still a society armed to the teeth with any weaponry available?  What about living Christian values? All these deserve a deep reflection so as to generate a fundamental transformation from within.

Since individual houses built to accommodate one family and a few guests were used as Churches for the first Christians, the difficulty of getting the whole Church together regularly in one place explains the theological divisions within the Corinthian community. Various groups mentioned by Paul in 1Corinthians 1:12 met regularly however separately. Such relative isolation made each group develop its own theology which virtually took root before being confronted by any one. News about factions among these house Churches reached Paul via members of Chloe’s household as mentioned in 1Corinthians 1:11 while Paul was working in Ephesus. Addressing the Corinthians as brothers in verse 10, Paul reminded them of the familial love which should characterize their relationships. In his appeal for unity, Paul used some interesting Greek phrases inviting his converts that “agree in what you say” 1Corinthians 1:10. Such a term was commonly used when two hostile parties desired to reach an accord.

Paul described these factions as schismata, a word which ordinarily described tears or rips in a garment. By virtue of their baptism into Christ, all believers were clothed with the same garments of grace and salvation yet inner strife was destroying the sacramental union forged at initiation. Paul’s appeal that “be united in mind and judgment” 1Corinthians 1:10 was applied as a medical term referring to the knitting together of bones that had been fractured. Farther on, Paul would expand upon the same physical metaphors to clarify the unity which should exist within the Body of Christ cf. 1Corinthians 12:12-31. Identifying the factions by their slogans, Paul named four. Some said, “I belong to Paul” 1Corinthians 1:12. Others I “belonging to Apollos” 1Corinthians 1:11 a well educated eloquent Greek-speaking Jew from Alexandria, others claimed “I belong to Cephas” 1Corinthians 1:12; while others argued that, “I belong to Christ” 1Corinthians 1:12. Yet, Paul had preached Christ crucified who was to be accepted, not by mere intellect, but by faith cf. 1Corinthians 2:1-5. Even today Paul continues to call all Christian denominations to resolve their differences and follow Christ in unity because for that he was crucified that they may be one.

In case you want to do a successful business, the location you choose to operate from determines the booming or declining of the venture. Location is the key. Entrepreneurs understand that a good and prime location is absolutely essential. If clients cannot easily access the provided services, then success is virtually impossible. Those wishing to embark on a profitable undertaking usually study the demographics of an area in order to find an optimum base of operations. To do otherwise invites failure. But when comparing the way of the world with the plans of its maker, the opposite and often least expected holds true. For all practical purposes, Jesus should have begun his ministry in Jerusalem, the Capital City of the Roman Province of Palestinium. In that location, he could have contacted a great number of people in a relatively short period of time or following the lead of the Essene community and his cousin John the Baptist, Jesus could have chosen a desert location for his mission. But as is indicated in this Gospel, Jesus chose to inaugurate his mission in Galilee, an area also known as the Galilee of the Gentiles because of the fact that it was encircled and frequently visited by gentile nations.

Galilee comes from the word galil which means circle. Galilee was by Matthew’s day at least half gentile in population, half pagan in cult and bilingual, using Greek and Aramaic. Taking residence - the Greek verb katoikein means to acquire a house - in Capernaum by the Sea of Galilee, Jesus began to preach in the very territories which had been the first to fall to the Assyrians almost eight centuries before. It was precisely to Jews living in this spiritual shadow-land, an earthly Sheol that the eschatological light of Jesus the Messiah would begin to shine. Yet Matthew a seasoned Jew understood this location for the inauguration of Jesus’ ministry as being in accord with God’s saving plan as shown by his formula citation from the prophet Isaiah 8:23-9:1. For Matthew, Isaiah’s promise of an end to the darkness had come to fulfillment. Jesus, by his words and works brought to the world the light which dispelled the darkness of oppression and the overshadowing of death. His message was, and still is, a simple one. ‘Reform your lives!’ “the kingdom of heaven is at hand” Matthew 4:17.

Those who would hear this message and heed it would thereby be able to throw off the darkness of sin and its consequences so as to live in the light of the good news Jesus offered. The first ones to accept Jesus’ challenge were Simon Peter, Andrew, James and John who offered an example of the decisiveness and wholehearted commitment that are elemental to the life of the disciple. In time, Jesus’ ministry of teaching, preaching and healing would be theirs cf. Matthew 10, 28:20. Today, we the Church which professes Jesus as the light of salvation, and emulates those first disciples are called to exercise similar service. There are many problems and issues which darken our world such as prejudice, war, abuse, social injustice, hunger, poverty, ignorance, greed, anger, vengeance and apathy. As long as these overshadow anyone of us, then all of us are still collaborators with darkness. The word of God calls us once again today to tend to our mission of illuminating the world.

We need to reject visible and invisible acts of darkness that influence us. We need to work towards the virtue of unity to demonstrate that we are Christians. Time is now for us to abandon our prejudices, leave our confortable sitting places and fishing nets and repent so that we truly believe the Gospel. This is what it means to welcome in our lives the Kingdom of God.

NB: For those using the old and Luganda Sunday Missal the First reading is from Isaiah 8:23-9:3

During the reigns of Israel’s most powerful kings, David and Solomon, the nation enjoyed a period of prosperity and prestige referred to as the ‘golden age’. David had been successful in uniting the north and southern tribes in a covenantal allegiance. Without having to contend with the rivalry and tribalism which could only dissipate its strength, the nation became a force to reckon with. Thus, under David’s leadership Israel was successful in virtually all of its military campaigns, against the Aramaic states, the Ammonites, Moabites, Edomites, Amalekites and Philistines. Solomon’s reign succeeded in enhancing Israel’s reputation internationally. He established trade routes with Africa, Asia, Arabia and Turkey; generating substantial revenue for the kingdom. ‘Wiser than all other men’, Solomon was said to be exceptional with “knowledge as vast as the sand on the seashore such that he was famous throughout the neighboring nations” 1Kings 5:9, 11.

However, no sooner had Solomon died than the bright light which he and his father had succeeding in igniting flickered and grew dim partly due to people’s dissatisfaction with Solomon’s programs of enforced labor and excessive taxation. The inability of his sons to maintain unity made the kingdom to being conquered by Assyria and Mesopotamia. Prophet Isaiah, a citizen of Jerusalem and adviser to the kings of Judah around 740-700 B.C, witnessed the downfall and interpreted it as just punishment for sin. Yet he prophesized of a future messiah whom he foresaw as ‘anointed one’ who would rout the Assyrian occupation forces and reunite the kingdoms of Israel and Judah. His reign would bring light and joy making darkness to be dispelled. He also foresaw “the day of Midian” Isaiah 9:3, which meant another period of oppression that would be reversed by a ‘new Gideon’ in the person of Hezekiah son of Ahaz. But, as is reflected in today’s gospel, we can conclude that the pall of darkness which hung over Israel and Judah was to be lifted only by the person of Jesus. We are fortunate to be among those witnessing the reign where Christ is our Lord and King.