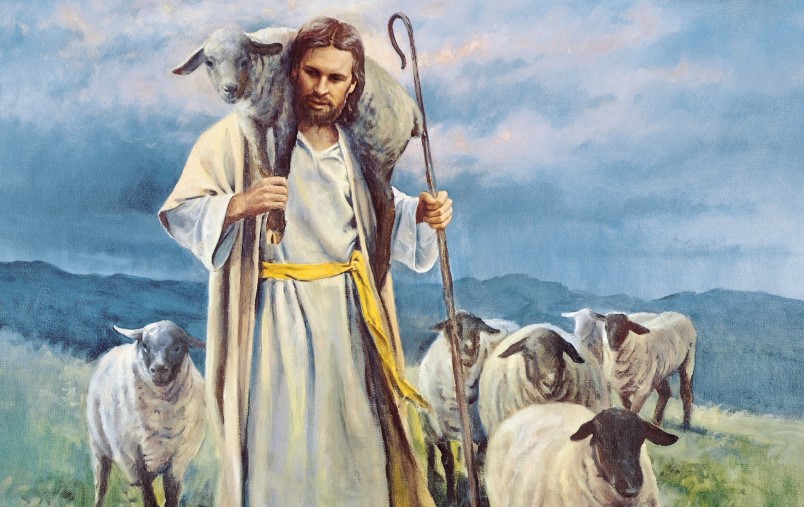 The Shepherd and shepherds

The fourth Sunday of Easter draws our attention to Jesus Christ the Good Shepherd. This Sunday is also called “Vocation Sunday” because it is a day of special prayer for all those who are called to be “shepherds” in the Church. We must acknowledge that there is only one Shepherd and all the others participate in His mission of being shepherds in order to open up the access to the pastures of life that he Good Shepherd gives.

God, the Shepherd of His people

The First Covenant (Old Testament) uses the term “sheep” to refer to the people of Israel and thus, God as its Shepherd. It is God who set out to lead His people and to care for them. His name “Yahweh, means “I am who I am” to refer to His presence wherever and in whichever situation of life His people would be. It is important to note that the human beings whom God involves in assuming leadership for His people had a “shepherd – background”: Moses was tending the flock of his father-in-law when Yahweh called and gave him the mission of leading His people out of slavery in Egypt (Ex 3); David, the great king of Israel was taken from the sheep and anointed (1 Samuel 16). The intention of Yahweh was to have shepherds who had a heart for His people. Unfortunately, in the course of the journey, shepherds turned out to be feeding themselves rather than feeding the sheep entrusted to them (Ez 34, 2-10). Yahweh decided to take over the task of gathering His sheep from where they had been scattered by the predatory shepherds (Ez 34, 11-31). Ezekiel 34, 28 deserves some careful attention: “They shall no more be a prey to the nations, nor shall the beasts of the land devour them. They shall dwell securely, and none shall make them afraid”. It is, in fact, true that the “shepherds” themselves become the beasts that devour God's people. When God take charge of His sheep, the sheep are secure in His presence.

In the Gospel according to John, Jesus does not only present Himself as the Good Shepherd, but He also gives the characteristic marks of being a Good Shepherd. In today’s Gospel, Jesus speaks about the very reason for His coming into the world: I have come so that they may have life and have it to the full.” This distinguishes Him from the shepherds who turn out to be thieves and bandits whose intention is to steal, kill, destroy and eat. Someone made a very interesting observation that Jesus is “a shepherd who does not eat mutton!” His concern is the life and safety of the sheep rather than seeing the sheep as a source for profit. He guarantees the life of His sheep by laying down His life for them.

The Good Shepherd knows His sheep and the sheep know His voice. They will never follow a stranger. Those are in a way good sheep. It happens often that the sheep follow strangers especially when they make attractive promises. There are many who, in addition to being shepherds (pastors), have declared themselves prophets. Someone pronounced them wrongly and called them “profits!”. Jesus himself warned us: "Beware of false prophets, who come to you in sheep's clothing but inwardly are ravenous wolves.” (Mt 7, 15) We are the sheep of the Good Shepherd. He gives us a chance of getting to know His voice. He has given us His Spirit to assist us in distinguishing the many voices that lure us into different traps in the name of quick answers. The gate that leads to Jesus’ sheepfold is a narrow one. He takes the lead and invites us to follow him. He knows which pasture is best for us. In order to have what really satisfies the deepest desires of the human heart, we ought to go through Jesus. He gives true us freedom because He opens the gate for us to freely go in and out. All those who feel the call of being shepherds must go through this gate.

It is another amazing fact that Jesus the Good Shepherd chose to share his mission with His sheep. He takes some of the sheep from His sheepfold and entrusts them with the responsibility of caring for the others. The Letter to the Hebrews alludes to this: “For every high priest chosen from among men is appointed to act on behalf of men in relation to God…” Being chosen from the people should be always born in mind by those who embrace a special vocation in the Church as priests and religious. They didn’t fall from heaven and they are not better than the others. They only have a special mission of representing the Good Shepherd in leading others to the path of life. Like Peter in today’s first reading, consecrated people are to invite the others to be aware of the gift of the Holy Spirit that they have also received in order to realize their unique vocation. Many will be added to their number, if they try to live their vocation with joy. In order to live a life that corresponds to their calling, consecrated people are ever in the school of the Good Shepherd. The goal of this on-going formation is to appropriate for themselves the sentiments of the heart of the Good Shepherd. Walking in the path that the Good Shepherd trod, the consecrated people will convincingly invite others to return to the Shepherd and guardian of their souls (see 1 Peter 2, 25).

Shepherds for one another

The Covid-19 pandemic has shown how limited human beings are, but at the same time how rich we are with human values. We are in a time when many are convinced that we can only overcome the battle against the coronavirus when we hold together; when everyone takes charge of being the other’s keeper. We are called to live in solidarity so that none has to starve. It is a time when “our survival” takes precedence over “my survival”. We were only shocked by our elected members of parliament who had managed to creatively allocate themselves a certain percentage instead of putting resources together in order to feed the hungry during the time of the lockdown. Luckily enough good sense has been restored. No excuse should justify the move of these our “shepherds”! It is good that the sheep can call the shepherds to a correction of course. The shepherds who follow the example of the Good Shepherd should share worries and anxieties of the sheep. Pope Francis rightly invites the shepherds “to have the smell of the sheep”. Let us continue to pray for good shepherds both in the Church and in the society! May our common calling move us to overcome all sorts of indifference, so that nobody may imitate the answer of Cain: “Am I my brother’s keeper?” (Gen 4, 9) Let us allow the Good Shepherd to lead us through the current dark moment of the covid-19 pandemic!