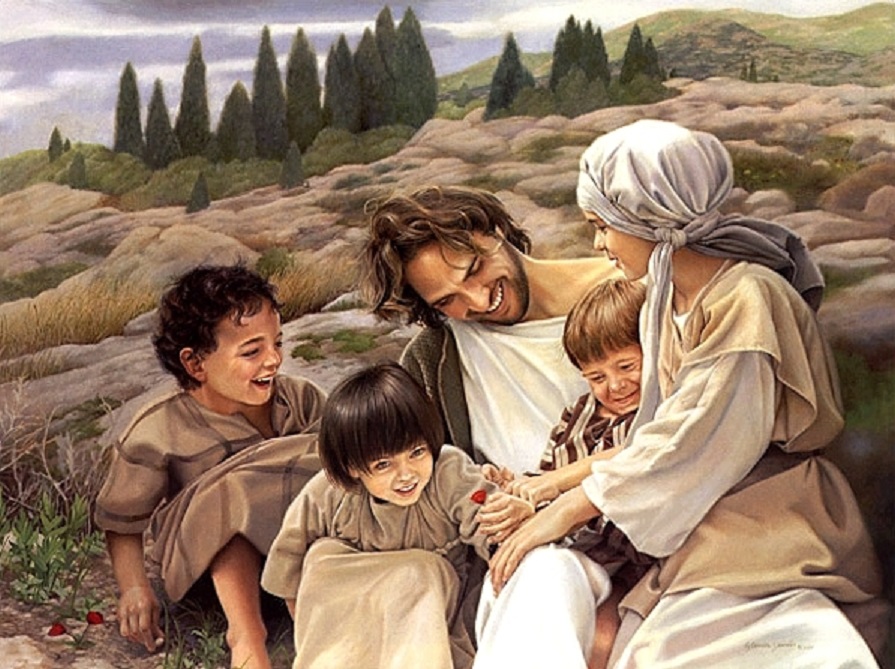 Human life is possible only in life-giving relationships. This is the heart of the message that the word of God gives us on the 27th Sunday in Ordinary Time B. The suitable relationships of love and faith are joined by God to be channels of love in the world.

The first creation account in Genesis 1, 1-31 presents a simultaneous creation of man and woman in the image and likeness of God. At that point of creation God saw that it was very good. The two receive an original blessing with a mandate to co-createthe world through human history. The second creation account in Genesis2, 4-25 describes the relationship between the man and the woman. Originally, the two were created for the purpose of companionship and partnership. It was as if God was making a correction, for it is said: „It is not good that the man should be alone.“ (Gen 2,18). God made him a „suitable companion“. The woman was made out of the rib of the man. This means that the two are made out of the same material. Here we  get to know the foundation of the fundamental equality in dignity between man and woman. The relationship between man and woman became vulnerable to sin. In fact, sin created division between the creator and creation itself. In Genesis 3 we see that sin caused friction between the two who were meant for companionship. Love would then require hard work and real commitment. The cracks in relationship can only be healed by forgivenness and thus realize the beautiful plan intended by the Creator. A realistic look at our relationships will move us to say like God: „It is not good.“ And thus, we ought to do something to restore our relationships which normally start with a discovery of a treasure in each other. Let us start afresh!

Many will accuse the Catholic Church of being inflexible with regard to divorce. In fact, according to catholic teaching there is no divorce. If anything, then annulment (nullification) to mean that the two lives did not come together for the holy purpose. What God has joined together, let no man put asunder. Those who get married sacramentally form a deliberate partnership that is inspired by the love of God and nourished by fidelity. Is the stance of Jesus and that of the Church about indissolubilty of marriage unrealistic? No. The man and the woman, who freely enter the bond of marriage are motivated by faith in God who has given them the gift of love. Human fidelity is based on the faithfulness of God. It is a fact that many a times people enter marriage for a variety of reasons: legitimization of a sexual union, avoidance of lonelines, fight financial insecurity, win a celebrity, please ones parents and relatives etc. If partners are not ready to always start afresh, then they will certainly break apart. Mutual forgivenness is an element that accompanies married people. Unfortunately many people have wounded each other in their marriage. The worst victims in any broken marriage are the children. An ever growing love of parents creates a safe and warm nest for the children. We ought to pray for families that have either broken up or are at the verge of breaking up. May the Lord remind them of their beautiful beginnings! Love that is constantly being poured into the hearts of lovers should in any a way soften „hardened hearts“ so that they are once again capable of giving and receiving love.

Jesus is our companion

When Jesus took on our humanity, He became our best companion. He accepted all human absurdities in order to heal the wounds caused by our human nature. He became a companion in death so that we might become companions of eternal life. The author of the Letter to the Hebrews tells us that with Jesus we become children of a loving God. Jesus is not ashamed of being our brother. He chose to welcome us into his holy family. Unfortunately there are families who either hide away or disown their less admirable members like those with disabilities. With Jesus as our companion, we are encouraged to be companions in our families, communities, friends who are continuously being joined together by God to bring love into the world. As Christians, we shall be more credible witnesses if Jesus gives us his preferences and tastes so as to love especially those who may be closed out of the love-circles. May the Lord save us from the illusion of perfect families, partners, friends and communities and instead lead us to a path that will see us as imperfect companions moving together towards perfection!