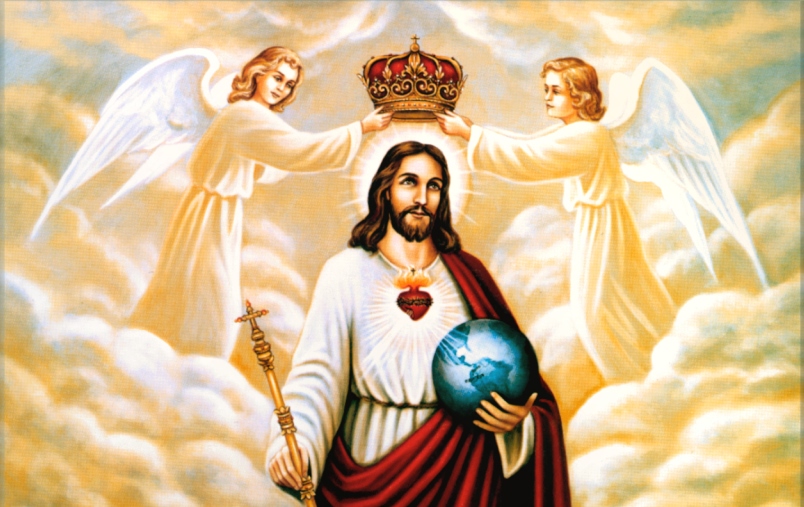 Mine is not a kingdom of this world

The coming of Christ into the universe brought a lot of changes in the understanding of the people of his time and even to us today. Through his life and ministry, he touched many lives; he turned upside down many social systems and mentalities. He associated with the least and the lowliest, the poor, those who needed healing. He identified himself with the marginalized and the abandoned of his time. Such is the kind of King Christ is.

The concept of kingship that he presents does not have attributes that in anyway are linked to the worldly concept of kingship. We can think about the extravagance, the pomp that is associated with the kings of the world. People suffer and fight in order to protect them. On the contrary, Christ is the king who suffers for his people. No wander he says to us in today’s gospel that if his kingdom were of this world his servants would have fought to defend him (John 18:35). This made many not to think about him as the king, the savior of humanity.

Christ made clear what the kingdom of God is and also showed its presence by his own life and example. He came at a time when Israel awaited a king, a messiah. Many did not recognize this in him because his way of doing and acting and also the kingdom and redemption that he proclaimed were contradictory to the expectations of the people. No one thought that the King of Israel would manifest himself in such a lowly state. Born in a kraal in a manger in a helpless poor state, a king who himself had to go to exile with his family. A king who associated with the weakest did not surely appear strong enough to bring liberation. In other words he brought more doubt that trust to the people except to those who encountered him.

The kingship of Christ that we celebrate today is not according to our human perceptions of the term. Christ is a servant King. He is a king who is ready to lay down his life for his subjects. This is not in line with the common understanding of a king who in human understanding is protected by his men. Instead Christ protects his subjects. He bends down to serve them. He gives them what they least expect from him. So in order to identify ourselves as part of His kingdom he challenges us to be like him. In baptism we became like Christ, prophets, priests and kings. Thus we are to be like the prophets, mouth pieces of God, or like priests, offering sacrifices to God proclaiming justice, love and peace or like Kings, serving and reigning with him. By carrying out these we secure ourselves a place in his Kingdom.

The king with a crown of thorns

We celebrate a king of love and compassion who is so close to his flock and tends to their needs. The throne of Christ the King is the cross on which he hung crowned not with a golden crown like earthly kings, but rather with the crown of thorns. It is a crown of pain, the prize he paid for his people. He teaches us that there is victory in suffering, a suffering born out of love. Love is ready to endure pain and suffering for the good of the others.

By his crown he challenges our kind of leadership. He challenges whoever is in a position of authority to be lowly, to give their all and not to be afraid of spending their lives for the people. Unfortunately for many this example has not taken root. It scares rather than motivates. He challenges us to look at the least, to uplift then not to look down on them. He challenges our attitudes of individualism, of thinking about only ourselves, of being myopic, not looking beyond ourselves, our families, our tribes and other groups to which we subscribe and identify with. This image of Christ the King must aggravate provocatively our relationship with others.

The kingdom of Christ is a kingdom of love, peace and justice. We must let go actions that are not of love, those that don’t propagate peace and justice such that the kingdom of Christ may reign in us. At the central message of his proclamation was the kingdom of God. He called us to repentance and belief (Luke 4:42-44) because the kingdom is in our midst, thus, when we let off the earthly mentality of kingship, we are joined as one with him in his kingdom. Christ is the only king, let us submit ourselves to him, let us be formed by his heart such that we may more and more resemble him and render service unreservedly to the poor and the lowliest of our time.