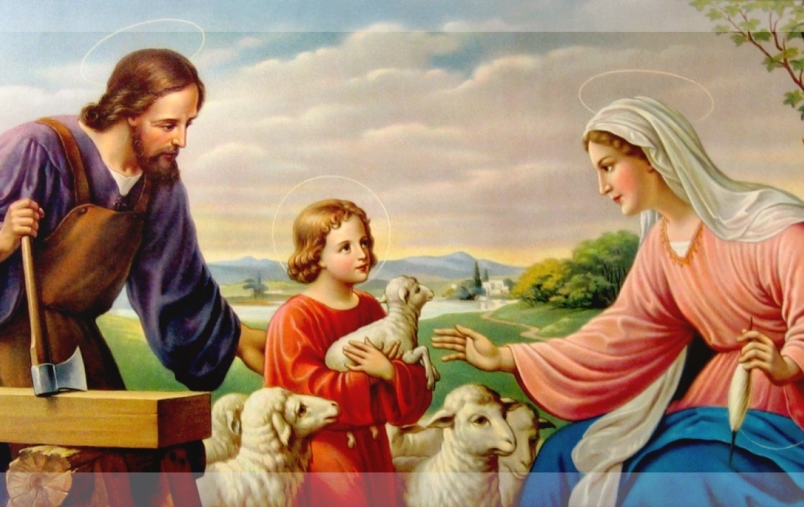 There is nothing moving in life than to hear another say, ‘I need you; I cannot do without you.’ This story points to the essence of what we celebrate on two levels today: the gift of the human family as the centre of shared need, sorrows, joys and hopes; and the gift of the Holy Family, where all those needs and hopes, sorrows and joys have been addressed with a love beyond all telling. Of all the ways that God may have chosen to communicate the gift of salvation, God chose to do it through the bonds of family.

There is no little significance in that fact. God as family, often called Trinity, has chosen to relate to human beings in the manner of a parent as God the Father, as sibling in the image of Jesus and of a driving life force as the Holy Spirit. That divine family spawned the human family of Mary, Joseph and Jesus. This family has, in turn, inspired human families through the centuries. In their care for one another despite difficulties, misunderstandings and struggle, the Holy Family remains the measure for nuclear families everywhere.

Happy families own a surface similarity of good cheer. Above all, they like each other, which can be quite a different thing from loving. Among themselves, they have always one hidden treasure which is ‘homemade humor’ that they have accumulated against rainy days and difficult times. Their humor is not necessarily amusing. Their jokes may not be appreciated by outsiders and their laughter can arise from the most trivial sources. But the joys and the laughter and the happiness belong entirely to the family. While they may have had their own personal treasures of humor to ease the struggles of daily living, families in the ancient world were also bound to one another by a strict code of honor. Even if children should harbor no natural love for their parents, they were duty-bound to honor them.

This societal ethic was affirmed in the Decalogue, where the mandate to ‘honor your father and your mother’ followed immediately after the commandments pertaining to God and right before those that conceived other human relationships cf. Exodus 20:2. The term ‘honor’ carries with it a range of connotations far broader than mere obedience. To honor was ‘to show respect, to glorify and exalt, to care for’. In fact wise people who lived before Joshua ben Sira had alluded to the reward and blessing that would come to those who honored their parents. For example, the call to honor parents in the 4th commandment was followed by the stipulation: “that you might have a long life and prosperity in the land which the Lord your God is giving you” Deuteronomy. 27:16. By the time Joshua ben Sira offered his wise counsel on the subject, the stake had increased and honoring parents was described as atonement and a platform from which the debt of one’s sins resolved. Honoring parents, according to Joshua ben Sira guaranteed his audience that their prayers would be heard and that they would have the gladness of their own children. Concluding this pericope, Joshua ben Sira acknowledged circle of life and reminds grown children to accept the responsibility of aging parents. ‘Even if their mind fails,’ insists Joshua ben Sira. For that reason, all of us ought to find strength, patience and courage to continue to care for one another.

In which place do you find yourself at the best of your self confidence and freedom! Is it when you are in Church or with friends singing and sharing? Have you ever asked yourself why this happens that way? Perhaps this is the reason why the early Church realized that some of its most transformative moments would be communicated through liturgical communal hymns and songs. It is not strange therefore that the Christian community couched some of its most important teachings in musical form. Today’s second reading represents a poetic instruction in a liturgical framework, the subject of which is the mutual care and compassion that members of a community and family are to extend to one another in Christ’s name. It was by such poetic inspirations that the believers were strengthened to defend their faith with both their lips and lives. Similar poetic teachings are available elsewhere in the New Testament cf. Ephesians 5:22-6:9.

The chief concern of these teachings was to offer rules to live by. However, whereas the ordinary Colossians intent was to assure that individuals remain true to their own station in life so as to maintain harmony in society, Christians offered a new motivation. Rather than follow certain set rules for harmony’s sake, Christians were to submit to one another in order to show their submission to the Lordship and leadership of Jesus Christ. This submission would be learned when the baptized “opened themselves and offered the Word of God a home” Colossians 3:15. Eager to hear the word, we the believers of today are also called to sing the word with gratitude, thereby teaching and administering to one another.

Many expectant parents admit to having dreams about their new child during the months preceding their birth. Some dreams center on the child’s future career: Will he be a singer? Will she be an engineer? Others focus on some special contribution their child may offer the world such as discovery of a cure for cancer; a solution for global warming. After the child is born, these dreams are often relegated to distant memory as the reality of nurturing, guiding and protecting this actual new life sets in. In the ancient world, however, dreams were not so easily forgotten, as is reflected in both the Jewish and Christian Scriptures. Indeed, dreams were regarded as nocturnal vehicles for special communication. In this Gospel, the special communication carries a revelation from God intended to guide Joseph and Mary to save Jesus from loaming murder. These dreams as narrated by the Matthew are also rooted in formula citations intended to illustrate that Jesus is truly the fulfillment of messianic expectations as it was expressed by the prophets of Israel.

First among the three formula citations that support this Gospel is a reference from Hosea 11:1 “Out of Egypt I called my Son” Matthew 2:15 principally referring to the exodus of the Israelites from Egypt initiated by God and enacted through Moses. Matthew would of course have acknowledged this meaning, but he was also reveling that this text looked backward and forward. Just as the coming of Jesus would effect a new genesis for humankind, so also it would bring about a new exodus. As was Israel in the past; so now would Jesus the Son of God be called through Joseph’s dream out of Egypt to the Promised Land where he would accomplish the ultimate deliverance from slavery to sin for all humanity. Matthew 2:17

The second citation recalls Rachel weeping for her children at Ramah referring to the suffering of the innocents under Herod at the time of Jesus’ birth as well as pointing to the suffering of Jesus on Calvary. Though he was blameless, he sacrificed himself because of our sins to save us from total annihilation.

The third dream establishes hometown roots of Jesus. After Herod’s death, Jesus and his family returned to Israel as per the advice of an angel in Joseph’s dream. The specific words “He shall be called a Nazarean” Matthew 2:23 means ‘an inhabitant of Nazareth’ Then the word Nazir means: “one who is consecrated to God” Numbers 6:1-23 while Netzer means “branch” Isaiah 11:1. Calling Jesus a Nazarean cast him in light of both of these references. He was, indeed, consecrated to God. He was the branch that would come forth from the stump of Jesse to be in David’s line in order to bring peace, justice, forgiveness and redemption to people exiled from God through sin. What Joseph dreamed, we have the privilege to live.

In this era and time we have to congratulate the families that have remained true to ideals by retaining best values of our African and Christian family. We have to guard against some virulent ideological poisons from abroad claiming to be ‘modern culture’. Those that are married should continue to welcome children as gift from God and train them in the knowledge and fear of God. We should be aware that many of our families are under great stress; that is why we call on governments and civil authorities to remember that a nation whose legislation destroys its own families does so at its own detriment.

Our families today need understanding in order to grow into a peaceful community. Like millions of other fathers, St. Joseph faced a crisis of responsibility yet he persevered to the good completion. No matter circumstances, the family needs to respect the plan of God which is always bigger than our imagination. We have to know that love in the real world is harder than any dream but is possible to achieve. In our families, it is important that men learn how to be real men while women learn to be real women. Vocation into marriage in never for leisure but primarily for love and raising a family that is open to accept that children are not just unique persons but family members. Whatever sacrifices deemed necessary to fulfill this purpose must be considered worthwhile and personally fulfilling. Times and families have changed drastically, but the purpose of the Catholic family remains the same: to raise good citizens and form faithful Catholics. Modern family life allows little material time for the family to be together, however, whatever moment you get together use it as quality time and spend adding value to your family.