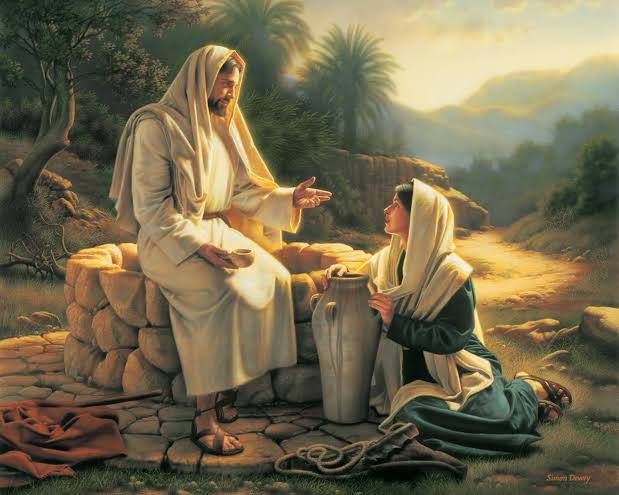 Fresh potable water is a necessity of life which most of us here in Church today take for granted. Water is reachable at the kitchen sink, in a cooler; it is also available in different flavors and at various prices for more sophisticated and palates. For many people of our generation, water has become desacralized although the need for water has not changed but only conquered.

Is it possible, under such conditions, for water to retain its salvific significance? Today, the Church encourages us to be sensitive and respect the scriptural image of water.

Because of its elemental importance for human existence, water is an apt symbol which has been readily incorporated into every aspect of the story of salvation. At creation, God’s spirit hovered over the primordial waters which began to teem with life. The flood which covered the earth was understood as God’s purification of sinful humankind. Israel’s exodus from Egypt, the pivotal liberating event was significantly marked by a watery passage through the Red Sea. In fact Israel’s history and its prophets interpreted an abundance of water such as rain, spring and fountains as a sign of God’s favor while lack of water or an unwanted abundance of it during floods carried a message of his displeasure and judgment upon people. Recognizing the divine mastery over water which sustains physical life, Israel was equally appreciative of its spiritual charisma as a life-sustaining utility. Both of these needs are illustrated in Exodus. Israelites grumbled for water to slake their physical thirst, while their spiritual hungers for him caused them to cry out, “Is the Lord in our midst or not?” Exodus 17:7.

Variations of this incident occur elsewhere in Exodus 15:22-27, Numbers 20:2-13 and underscore the constancy of God’s care and concern despite the continuing ingratitude and contentiousness of Israel. Israel’s attitude of discontent and posture of rebellion against God and his representative, Moses, are further attested in the names given to the location of the incident, Massah, from the Hebrew verb nissa meaning to challenge, and Meribah, from the verb rib, which means to quarrel. In later Hebrew literature, the rabbis taught that the rock, which God commanded Moses to strike, traveled with the Israelites and provided a steady supply of water in the wilderness. Some traditions identified the rock with Yahweh himself cf. Psalm 18:2 while Paul put the qualities of Yahweh to Jesus by identifying Christ as the rock who offers spiritual food and drink to all the baptized cf. 1Corinthians 10:4.

Israel’s grumbling against God and Moses in the wilderness is starkly put beside Paul’s exuberant celebration of the joys of the redeemed. According to Paul, redemption is the gratuitous gift of God manifested in Jesus’ saving death on the Cross. By virtue of his death, Jesus has made just those all who had sinned. No one would have merited justice and grace if was not because of God’s mercy manifested through Jesus Christ. Indicting both gentiles and Jews, Paul explained that because of its universal sinfulness, the whole world stood liable to divine judgment. But, with Christ and because of God’s merciful love, a new era of salvation has begun making history take a new and radical turn granting eternal life to all who believe.

St. Paul describes the effects of justification in terms of peace, access, hope, love and life. Peace results when the alienation due to sin yields to the joy of reconciliation. Access/prosagoge in Greek is a vivid term which means being introduced and ushered into the presence of royalty. By his cross, Jesus had made possible our entrance into the presence of the Father.  When that door is opened what we find is grace; not condemnation, judgment, or vengeance, but the sheer, undeserved, incredible kindness of God. Access/prosagoge is also described a safe harbor/haven where ships can find safe mooring during storms. Humankind, when left to fend for itself is susceptible to the effects of sin which are most times overwhelming. But because of the access to grace afforded by Christ, there is safe haven for the faithful. Hope is not simply a desire for an illusory future but the solid assurance that God, who is true to his Word will never disappoint those He has justified.

Venerated as a saint among the Greek and Russian Orthodox and given the name Photeine in Greek/Svetlana in Russian which means radiant or shining, the woman at the well has been variously praised by Origen, St. John Chrysostom, St. Augustine and St. Teresa of Avila as: 1- an apostle, 2- one who left her water pot at the well in order to go off and preach the gospel, 3- the first apostle to the gentiles who invited her neighbors to ‘come and see’. Legend has it that when the woman left Samaria to preach the good news, she eventually made her way to Carthage in Africa where she was imprisoned for the faith and died a martyr.

Another legend, preserved in Spain, says that Photeine/Photina converted and baptized Nero’s daughter and one hundred of her servants. Fascinating traditions notwithstanding, the woman of Shechem offers veteran believers and catechumens a living example of dynamics of Christian baptism including: 1- The proposal of God to the sinner: Notice that Jesus initiated the conversation with the woman and it is precisely in this that God proves his love as Paul writes that, “while we were still sinners” Romans 5:8. Aware of the woman’s less than pristine life-style, Jesus nevertheless extended to her the good news of salvation. 2- The sinner’s growing response in faith and consequent conversion. Open to the truth of Jesus’ words, the woman asked him for the water he had offered her. She also acknowledged him as a prophet and professed her faith in the coming messiah. 3. The mission of the disciple is to proclaim the good news to others. At the woman’s invitation, her neighbors consented to come to see Jesus; having heard him, they believed. Also evident in this narrative is John’s unique literary techniques and theological insights. By introducing various levels of understanding and misunderstanding into the interaction, John was able to guide his audience to a fuller and deeper appreciation of Jesus’ purpose. For example, the woman misunderstood what Jesus meant by living water; this led Jesus to explain about the gift of water as a fountain within which provides eternal life. So also, the disciples, concern that Jesus should eat something, misunderstood his claim ‘I have food to eat of which you do not know’. Their confusion led to an explanation that Jesus’ food and sustenance was to do the will of the Father. It is in our confusion that God works best to put us right.

At work also in this gospel is John’s replacement theology. In the literature of Qumran, the writings of the rabbis and scripture cf. Sirach 24:23-29, the Torah was described as water which both cleanses and sustains life. Those who wished to walk in God’s ways were called to drink deep and daily from its font. But Jesus’ gift of water was a superior source of life and nourishment which replaced the Torah and its significance for believers. What did Jesus mean when he referred to living water, there are two possibilities: living water means the revelation/teaching which Jesus came to give and it also means the Spirit which Jesus bestows. Today, the invitation of the Samaritan women to “come and see the man who has told me everything I have ever done” John 4:29 reminds all thirsty sinners that we are daily called to be cleansed, taught, renewed and satisfied by Jesus’ great gift. Mother Teresa of Calcutta explained why like the woman of Samaria we should give ourselves completely to God! Because God has given Himself completely to us. If God who owes us nothing is ready to give us nothing less than Himself, why can’t we reciprocate with only a small part of ourselves? Giving ourselves totally to God is a way of receiving God. To possess God we must allow Him to possess us.

Today we are reminded that as children of God and members of the Body of Christ, we are called to do the Divine Will of He who has called us to share in the life-giving Spirit through Baptism. To persevere necessitates reception of the Sacraments of Confession and the Holy Eucharist as the means of maintaining our righteousness. As we approach Easter, we have an obligation to reinstate our holiness and to remain thirsty for the living water.