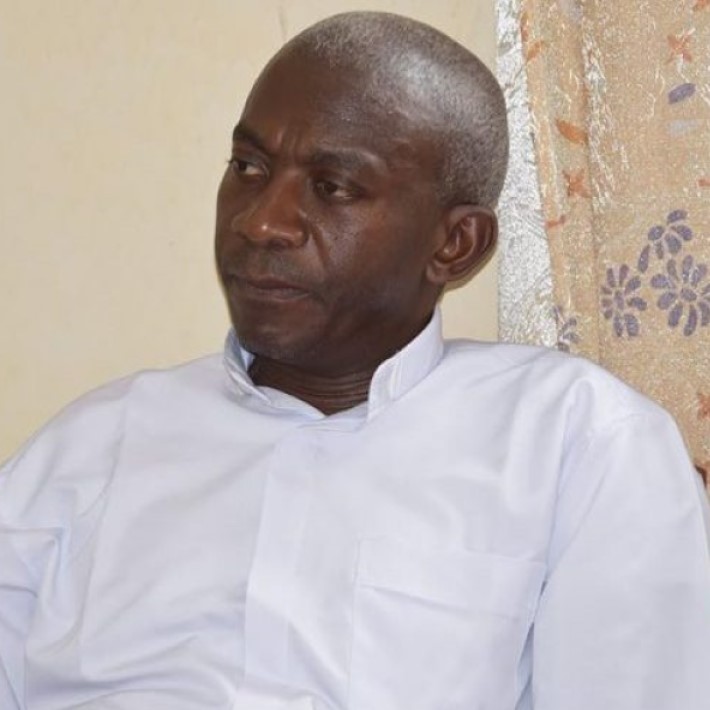 Fr. Achilles Kiwanuka, a soft-spoken priest did not expect to be the head of the Uganda province. Since his ordination in August 1997, he had not worked in Uganda. After being denied a visa to Khartoum when the diplomatic relations between Kampala and Khartoum deteriorated In 1997 and his Superior asked him to go to Egypt to study Arabic.

Life in Egypt was not easy and he studied Arabic for one year. In 1998, Fr. Achilles was asked to go to the Pontifical Institute of Islamic Studies; there he did his Master’s Degree in Arabic and Islamic studies. While in Egypt, he worked with the Sudanese refugees in Cairo for seven years, in the internally displaced camp in Cairo. He taught the Sudanese Refugees Islamic studies and history and also worked at Sacred Heart Parish where the refugees were based.

In 2008, he was transferred to St. Joseph’s Parish in Zamalek Island in Cairo as a Parish Priest. He spent two years at St. Joseph’s and thereafter went to Rome for a course in formation and he completed the course in June 2012. In that very year, he returned to Uganda and was assigned to Namungongo Novitiate. He has since been at Namugongo till he moved to the Provincial House as the Provincial Superior of Uganda Province. He is still marveled by his brothers choosing him to lead them although it was the last thing on his mind; he says he always wanted to lead a peaceful life and the novitiate was the best place for him.

Growing up, Fr. Achilles’ life was a very simple and quiet. It all began in a small quiet village of Ssennyomo in Gombe, Mpigi district where he was born to the Late Mr. Francis Xavier Mulindwa and Magrette Nambalirwa in 1967. His father was a catechist at the village church while his mother was a business woman who also taught many women handwork like: making baskets, mats and sewing clothes. Fr. Achilles’ family was wholly involved in church activities; such as the church-choir. He himself began playing drums in the church at the age of 5 years. His mother also helped his father with the catechism on days he would not be available. He said that it was that religious environment that shaped his life and also encouraged him to play drums at a tender age in church.

Although in 1975, his entire family moved back to Masaka their ancestral home, his parents would commute between Masaka and Mpigi. He continued with his education in Masaka. He was already in Primary three since he had done his first two years of Primary in Ssennyomo village. In Primary three he was registered in Ndegeya primary school, which was 2.5 Kms from his home. Fr. Achilles says he remembers running to school every morning, returning home for lunch and running back every after lunch. His life changed to another lane, after a visit from his father’s friend who worked at the Ministry of Education at that time.

When Mr. Katera saw Fr. Achilles’ end of year report, where he was the 2nd in primary six, he encouraged his father to take him to a better school since his performance was encouraging and that would greatly improve his grades. The following year he was transferred to Kijabwemi Primary School, which was a protestant founded school but coming from a village school, he was taken back to Primary six and that did not change anything. He notes that the year 1979 was uneasy year since the country had plunged into a liberation war and as such it was a rough time for the district of Masaka and his family altogether. His family lost everything to the war. In 1980, he sat for his primary seven and performed well irrespective of the fact that he was going through a lot of pain. “I am proud that I went through it though with pain,” Fr. Achilles added.

He notes that with the meagre income from his family, he could not go to a secondary school outside Masaka town, so he went to Masaka Senior Secondary School. At the time the school wasn’t the best but he had no option. In 1984, he sat for his O-level exams and senior six examinations in 1987 February respectively and after which he joined the seminary.Fr. Achilles got the desire of becoming a priest at an early age.

While in primary five, he felt the desire of becoming a priest but the many obstacles that kept coming his way obscured his chances. He noted that the first time he ever spoke out his intension of becoming a priest was when they had a Boy Scout meeting and when the scout’s master asked each of them what they wanted to be, he came out and said he wanted to become a priest. In Primary six, he applied to Nswanjere preparatory seminary, though something went wrong and missed the admission. When he was in primary seven, he again applied to Bukalasa minor seminary, they were two boys from his school and they were not short listed, so they missed admission again, although they would send interviews to the parishes.

That did not discourage him; he kept his desire and dream alive. At home as children they always played games when they were in church, Fr. Achilles said, he would always be the priest who celebrated the mass in all the games. After the return of Primary Leaving Examination, his father who was a great friend to the Parish Priest who happens to be Emmanuel Cardinal Wamala, paid a visit with him and when he told the cardinal his intensions, he encouraged him not to abandon the desire and heed to his advice. When he was in HSC, he prayed about his desire. He always prayed to Mother Mary about his intensions and desires. He also managed to talk to their Chaplain who encouraged him the more. His last year of secondary school, his parents decided to put him in a hostel and during his stay in the hostel, he had a friend Tony Kyagulanyi who he always talked to about his intensions. Kyagulanyi informed him about the Comboni missionaries, that he was also planning to join at that time, and promised him that if the vocation Director visited him, he would introduce him too. It was not long before Fr. Lorenzo Carraro who was the vocations Director at that time came visiting Kyagulanyi. He recalls that it was lunchtime when Kyagulanyi called him telling him that he wanted to introduce him to Fr. Lorenzo, oh what a joy!

Fr. Achilles says he was thrilled at the prospects of meeting Fr. Lorenzo. He had his forms filled immediately and a few weeks later, he received a copy of the flame Magazine and thereafter invited for orientation, which lasted two weeks. After the orientation, they were asked to return to school and before he sat for his senior six, he got an admission letter to the postulancy if he could pass his HSC examination. He passed his exams though he was not impressed with the marks but the Comboni could take him to university and so, he joined the Comboni postulancy. His dream was drawing near.

In 1987, he joined Katigondo where the Comboni postulancy had been transferred from Gulu because of the war. He studied philosophy for three years, and was later admitted at Namugongo Novitiate from 1990 to 1992. He took his first vows in April 1992. After the novitiate, he was sent to France to the Catholic Institute of Paris to study Theology for five year. He also studied his Maters in Theology in France. He returned to Uganda for his Priestly Ordination in 1997, and on August 2nd, 1997, he was ordained priest by Rt. Rev. Adrian K. Dungu the then, Bishop of Masaka Diocese.

Fr. Achilles, the Provincial Superior of the Comboni Missionaries, Uganda Province, took over office on January 1st 2017. He is bracing himself for the challenges that come with the office of the Provincial Superior. He says, the greatest tools he will use while in office are: listening and learning. “It’s a challenging responsibility, I have a lot to learn and know from my conferrers. I looking forward to knowing my fellow brothers, the places we are working in, what we are doing; the challenges we are facing and listening to our missionaries. I want to listen to people especially our conferrers, I would love to get in touch with the people with whom we are evangelizing especially the local church, I would love to get to know them so that we forge a way forward. How we can carry out our mission of preaching the word of God and spreading God’s kingdom. He further noted that he would not be the solution to the problem the province may be facing but instead would love to work together with the conferrers in the Uganda province to find ways of solving certain issues. “I always avoid presenting myself as a person who has come to fix things, I have to listen and to learn, and it’s an experience. Together we shall see how to face the challenges and how we can work out the problems,” he added.